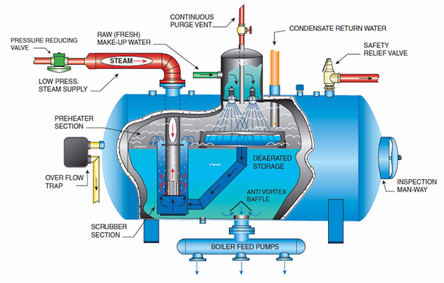 What is a deaerator? And deaerators are used for:

The deaerators are normally used in any chemical process industry or in power plants where the boiler is used for the production of steam from the boiler feed water.

The heating deaeration process is the separation process done by using mechanical equipment that has been designed in such a way that is used for the work process as desired. The basic principle of deaeration with a heating system is that when the temperature is raised in water, the solubility of the gas gases will decrease or decrease.

Deaerator is a component in the Steam Power System which functions to reduce oxygen or other dissolved gas gases in the feed water before entering into the Boiler. Also functions as a storage area for water that supplies water to the boiler.

Working of a Deaerator:

Oxygen Ok and other dissolved gases in feedwater need to be removed because it can cause corrosion of metal pipes and other metal equipment by forming an oxide (rust) compound. Water when reacting with dissolved carbon dioxide will also form carbonic acid compounds which can cause further corrosion. The deaeration process is carried out by using a portion of steam before entering the steam turbine to be used as a water heater that goes into the deaerator.

Chemicals that can reduce the levels of oxygen are very often added to feedwater that has been dehydrated to reduce oxygen levels that the deaerator cannot dispose of. The oxygen solvent commonly used is sodium sulfite (Na2SO3). This is very effective and quickly reacts with the remaining remnants of the remaining oxygen to form Sodium Sulfate (Na2SO4). In addition to Sodium Sulfite, the oxygen solvent that is also often used is Hydrazine (N2H4).

The deaerator consists of two drums where the smaller drum is a preheating place and the exhaust gas gases from the boiler water material. While the larger drum is a reservoir of boiler water material that falls from the drum above it. In smaller drums there is a spray nozzle which functions to spray condensate water into droplets so that the process of heating and removing gas gases from kettle water is easier and more perfect.

In smaller drums a vent channel is provided so that gas gases can be wasted (along with steam) into the atmosphere. The main element in determining the success of this process is the physical contact between the boiler water material and the heat supplied by steam.

Some things that need to be considered in the deaerator process are:

To achieve optimal efficiency, there are several things that need to be considered, namely: