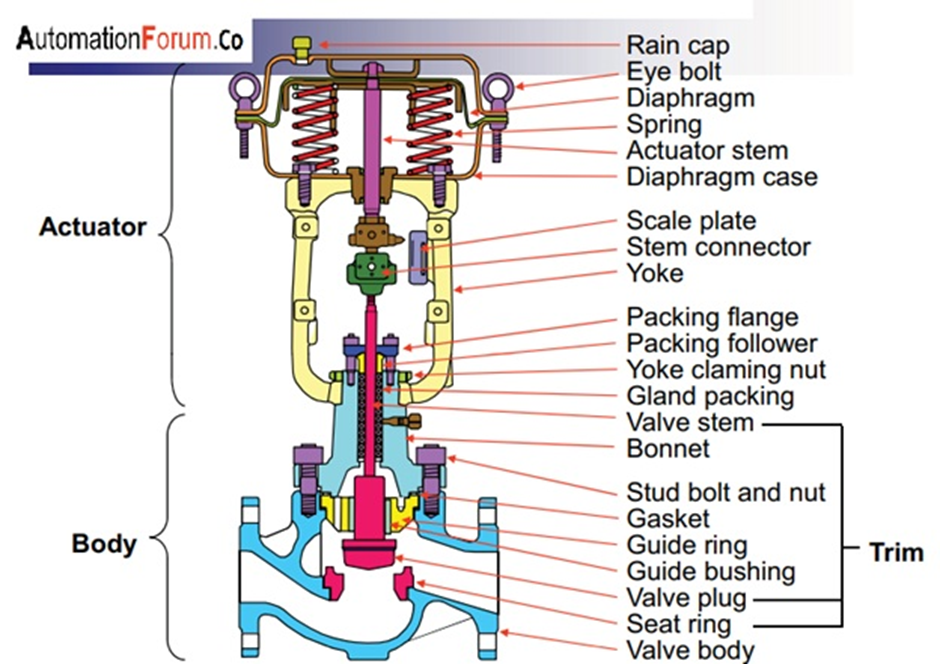 What is a control valve?

A control valve is a power-regulated device that is designed to control the flow of liquid of a system by controlling the size of the flow passage.

Control valve works on different types of actuation as described below

Pneumatic actuators use air or gas signals from external sources to generate modulation control actions. The drive receives the power of the pneumatic signal via the top connection. It then distributes the signal across the actuator diaphragm. This causes the diaphragm to put pressure on the diaphragm plate. This will move the valve stem down and brush the control valve.

These are electric devices. They use electrical signals that help create the rotation of the motor shaft. This motion is translated into a linear motion that supports the drive of the spindle in the valve for flow modulation.

Also Read: What are the types of pressure control valves and how does it work

Control valve components are mainly classified into two for easy understanding.. They are

Various components of the Actuator

Various components of the actuator are

Rain Cap: A rain cap is used to prevent the flow of water into the control valve

Eye Bolt: It is a kind of a hook to move the valve. It is placed on both sides of the valve (left& right).

Diaphragm: It is a flexible part of the control valve. It is intended to modify the incoming air power as well as the power passed to the diaphragm plate in order to make actuator stem movement.

Spring: It is usually in the actuator case’s yoke however depending on the manufacturer it may change.

Actuator Stem: It is linked with Actuator Valve Stem.

Diaphragm Case: It is the part that is designed for diaphragm plate packing. It has two parts: the lower and upper sections

Scale: The scale is based on the valve position in the 0 to 100% range.

Stem connector: Itis the link between the actuator stem and the plug stem.

Yoke: It is a component used to connect the actuator section to the valve body.

The Bonnet valve is a component of the Body Valve, and because this section is directly exposed to the fluid (fluid), selecting the proper qualifying material (material) as well as Fluid type, Temperature, Pressure, and all relevant process variables needs to be considered.

Packing Flange: It is used for stud bolt compression to tighten all the gland packing and prevent leakage of fluid through the bonnet’s neck.

Packing Follower: It is the Packing flange Gland’s strength. Tightly compacted packing that will tighten with time.

Yoke Clamp Nut: Yoke-style clamps are useful in situations when the bottom of the pipe is close to structural steel or other pipe components.

Gland Packing: It is in direct touch with the bonnet plug stem and performs an important role in preventing fluid leakage via the neck. The majority of the materials used are PTFE or graphite, and they require regular maintenance. There is a requirement to change the gland packing on a regular basis.

Valve Stem: It connects to Plug and works as the actuator’s strength.

Bonnet: It is a removable cover that is attached to the body. Some bonnets provide support for the valve’s moving parts. Others simply seal the hole in the body through which the moving parts travel during assembly and disassembly.

Stud Bolt and Nut: It is one threaded steel road and has two hexagonal shape steel nuts. It is considered an essential component. to joints flanged joints properly.

Gasket: A device used to prevent water leakage between the body and the cover during the assembly process of cast iron and steel.

Guide Ring: It is used to align the plug straight up. It is placed in bonnet order. It also helps to diminish the cost of maintenance.

Guide Bushing: It is designed for a guide ring support

Valve Plug: It is a type of valve that has either cylindrical or conically tapered plugs. Plug valves can control the fluid flow through the valves by rotating inside the valve body. The fluid can flow through the plug when the valve is open due to the plugs in plug valves having a couple of hollow passageways. It is very economical and simple in structure.

Seat Ring: The seat ring acts as an air intake and air exhaust valve. It has direct contact with the valve and controls the airtightness of the combustion chamber.

Positioner or position: It is considered as the main key to control of the control valve. This device is used to propel the head movement of an actuator by converting the signal to air power.

Control valves are classified based on their attributes and features.

Also read: All about control valves

Based on the pressure drop profile

High recovery valve: This valve is used to restore the static inlet pressure drop before the outlet vein constricts. The lower recovery coefficient is the main characteristic of this valve.

Low recovery valve: These valves usually restore a small fraction of the static pressure drop from the inlet to the outlet veins narrowing. It has a very high recovery coefficient.

Based on the controlling element movement

Sliding stem: The valve stem or plug moves in a linear motion.

Based on the functionality

Control valve: The control flow parameters change in response to an input signal from the central control system.

Shut-off / On-off valve: We can’t open or close partially in this valve. This valve is always fully opened or closed.

Check valve: Allows flowing only in a single direction

Steam conditioning valve: Regulates the pressure and temperature of inlet media to required parameters at the outlet.

Spring-loaded safety valve: These valves are closed by using the spring’s force. It opens the valve when the inlet pressure and equal force are the same.

Based on the actuating medium

Pneumatic valve: Actuated by a spring diaphragm, piston-cylinder, or piston-spring type actuator in a compressible media such as air, hydrocarbon or nitrogen.

Hydraulic valve: A non-compressible material such as water or oil is used to activate the device.

A wide variety of valve types and control operations exist. Control valves are again classified on the following parameters.

Based on the action, control valves are again classified into two. They are

Based on the Sliding Stem

Based on the sliding stem, control valves are again classified into two. They are

Based on the rotary, control valves are again classified into two. They are

(i) Inherent or ideal characteristics and

Why Control Valves are necessary?

Each and every process plants have hundreds or thousands of control equipment to manufacture various products for sale around the globe. Each of these control loops is designed to keep various parameters such as flow, level, pressure, the temperature at a certain level to produce high-quality products. Each of these loops receives various disturbance factors that affect various process variables.

Sensors and transmitters collect information about the process variable and its relationship to some desired set point to lessen the effect of these load disruptions. Various controllers in the process plant process this information and take necessary steps.  After all of the measuring, comparing, and calculating is completed, some form of final control element must implement the controller’s plan.

What is a temperature sensor and what are their types?

What is balancing in control valves?

What are the uses of Valve manifolds?