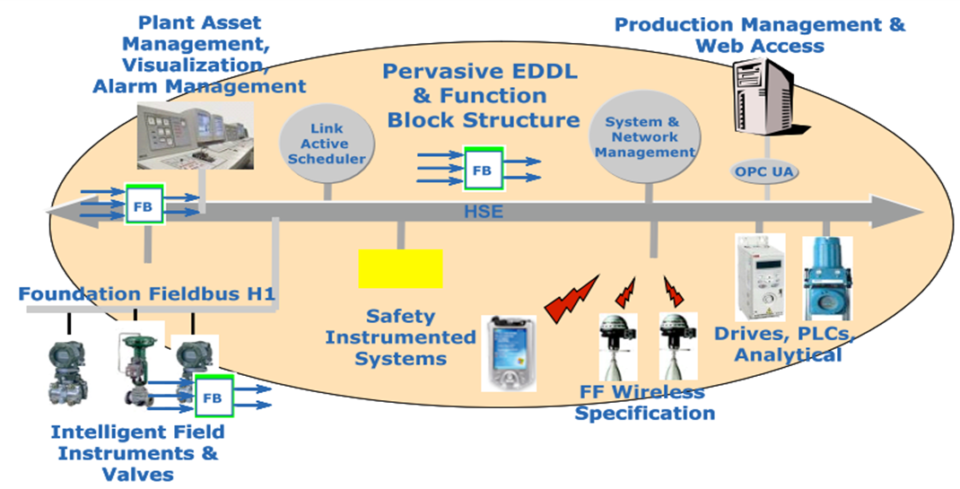 What is a foundation field bus?

A field bus can be described as the connection between industrial devices. The major purpose of a field bus is to replace the point-to-point link between the field devices and control system, instead of that Fieldbus would provide a digital link. In a field bus, the transfer of information would take place in small size packets in a serial way. There are many advantages for serial transmission over parallel and point-to-point transmission like there would be only a few transmission lines. So basically, Fieldbus is an all-digital, serial two-way, multi-drop communication system.

What are the major components of a foundation field bus?

What is foundation HSE?

How does foundation Fieldbus work?

The foundation Fieldbus uses the OSI layers to do its operation. The three used OSI layers are application, data link, physical, and in addition it would use a fourth layer which is the user layer.

This would provide the high-speed data communication network, both the communication signal and also the current for each device would be transmitted by this section.

This layer would be useful to transmit the data between devices when a device receives data then it would publish the data on the bus so that all the devices can use it.

It would allow interoperability between the devices.

What is the major difference between conventional connection and foundation Fieldbus connection?

In this system, the analog and digital instruments would be wired individually to a centralized controller. The control functions would be processed by the centralized controller and the passive device would accept the command and provide the feedback. In a conventional system, two wires would be used to connect a field instrument. The wires would carry the electrical power to the device. The device would signal its measured value to the DCS controller by varying the current it uses between the 4-20mA. The controller would collect the data from the devices and it would do the required calculations and then it would send the command.

In the case of the Fieldbus, it would also use two wires to carry the power to the devices. But in this case, a number of devices would share the same Fieldbus wire. So due to this, the devices can send data to each other without the help of the DCS controller. The Fieldbus network is a digital, multidrop, bidirectional serial bus communication, so it would connect the isolated field devices such as controllers, transducers, actuators, and sensors. So due to this each device are capable to do certain functions such as diagnostic, control, and maintenance. So with the help of the Fieldbus connection, the operators would be able to communicate with the other field devices too. We could achieve a distributed control network with the help of the Fieldbus system and the data transmission would take place digitally. Each field device would be capable to carry out its own control and thus it would inform if there is any problem with the device.

What are the advantages of Foundation Fieldbus over the conventional connection?

Highway addressable remote transducer is a communication protocol, which is created for industrial process measurement and control. Mostly it is called a hybrid protocol because it combines the digital and analog protocol. The digital signal won’t affect the analog reading.

How does Hart work?

What are the major features of HART?

What is the major difference between HART and Foundation Fieldbus?

Comparison between Star and delta connections and How Star-Delta starter works?

What is Hot standby in PLC?