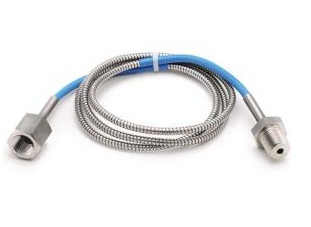 Capillary lines are utilized when instruments need to be removed from direct contact with the installation point due to elevated process temperature, pressure spikes or design specifications. Added between the measuring instrument and diaphragm seal, it protects from damage and/or accuracy degradation with slow heat transfer rate and dead-ended process fluid providing further protection

As in the direct mount version, the maximum vacuum will be reached at some point, normally within one hour. At this point the fill tubes will be lowered into the selected fill fluid, the system vented to the atmosphere, and the fill fluid is drawn into the evacuated instrument. Once the unit is completely filled, the secondary vacuum is released, and the bleed ball and screw are installed. This unit is now ready to be pressure tested and calibrated.

What is a piezo-meter and what are its types?