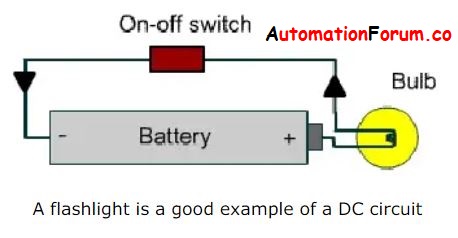 What is Alternating Current?

Alternating Current, abbreviated as AC, is a type of electric current in which the electric charge periodically reverses direction to create alternately positive and negative values with the same magnitude.

The voltage rises smoothly from zero to the highest possible positive peak voltage in the alternating current’s sine waveform. Once it hits the negative peak value, which is equal to the positive in magnitude but different in polarity, it reverses course and sinks through zero into the other direction. To complete a cycle, the voltage reverses once more and increases as it approaches zero. At either the 50 HZ or 60 HZ’s rated frequency, this operation is repeated in cycle per second.

In contrast to direct current (DC), which only travels in one direction and cannot sporadically shift, alternating current (AC) is an electric current that periodically reverses direction.

are used to produce the alternating current. Owing to its efficiency in generation and distribution, alternating current is the most widely used source of electrical power. Any necessary voltage level can be easily accommodated by stepping up and down the alternating voltage. The electrical power is transmitted at high voltages and low currents to reduce power losses in the conductors. This is later reduced back to meet the needs of the consumer at the distribution and consumer level.

What is Direct current?

The current that maintains both magnitude and direction constancy is known as a direct current, or DC. A DC current typically only has positive magnitude and a single-directional waveform. Due to its constant magnitude and direction, the DC waveform is a straight line. The DC waveform’s straight line is created through the smoothing process. This smoothing procedure makes use of an electrolyte capacitor. When the circuit is active, the capacitor stores/receives charge and releases it when the circuit is shut off.

Direct current (DC) is the continuous flow of the same amount of current in the same direction at the same intensity for at least one second via a conductor. Galvanic current or continuous current are two other names for direct current.

There are many factors are considered to use AC in home appliances instead of using DC. They are as follows:

It has been proven throughout time that AC voltage creates effectively. The results of fully converting to DC power are unknown from an economic and practical standpoint because not enough equipment is currently configured to operate with DC voltage for it to become common practise. While AC voltage continues to offer the simplest, most dependable electricity that enables people to get through their days with ease, DC voltage is rapidly revealing its inefficiency in giving power across greater distances.

The movement of electrical charge carriers like electrons is known as current. From negative to positive points, current flows. The ampere is the SI unit used to measure electric current (A). One coulomb of electrical charge travelling across a certain place in one second is referred to as one ampere of current. Appliances in the home and industry frequently use electric current.

3. What is the difference between AC and DC?