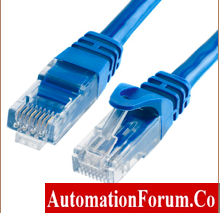 A local area network is a medium in computer network that links computers in a specific location, like a home, office building, school, lab, or university campus. It is used to link two or more computers together so they may share printers, scanners, and other network resources.

RJ 45 cable is used for connect computer to Local Area Network (LAN) for sharing the information between the computers, communicating with printers, accessing of internet. This cable is used to transmit the information over a particular length. The cable run needs a connection termination, which calls for a jack to plug through an RJ45 port. RJ45 cables have a tiny plastic plug on either end, which is put into an Ethernet device’s RJ45 port.

What does RJ45 Stands for?

The term RJ45 stands for Registered Jack.”45″ is the interface standard’s number.

A standardized telecommunication network interface for connecting voice and data equipment to a service provided by a local exchange carrier or long-distance carrier These are used in telephone and data jack wiring registered with Federal Communications Commission. RJ-45 is an 8-position, 8-conductor connector used in 10BaseT and 100BaseT Ethernet wiring, while RJ-11 is a 6-position, 4-conductor jack used in telephone cable.

Two wires of a single circuit are twisted together in this style of wiring in order to increase electromagnetic compatibility.

In Ethernet-based local area networks, an 8-position, 8-contact (8P8C) modular plug and jack known as an RJ45 connector is utilised (LAN). Eight pins are located on the port of an RJ45 cable plug, which is typically constructed of plastic. Four pins are used data transmission and reception. The rest four pins are for different technologies or to power networking

The RJ-45 was modified to fulfil the requirement for a different size connector brought about by the major technological advancements. RJ-45 connectors come in two sizes nowadays, one for Cat 5 cable and the other for Cat 6 cable. The user must ensure that they have the appropriate one for their task. Comparing them side by side is the most straightforward approach to tell them difference. Compared to the Cat 5 connector, the Cat 6 connector is bigger.

RJ-45 conductor data cable has 4 pairs of wires with a solid wire and a strip of the same color. Orange, green, blue, and brown wire pairs.    10BaseT/100BaseT Ethernet uses orange and green. The other two colors can create a second Ethernet or phone line (blue and brown). RJ-45 wiring uses T-568A/B.

The two wiring standards are used to create a cross-over or a straight-through cable.

Straight through cable is built using either T568 A or 568 B on both ends of cable.

Cross-over cable is designed by connecting T-568 A on one end and T-568 B on other end of cable.These type cable is used when connecting DTE to DTE or DCE to DCE equipment.

The plugs on RJ45 cables have eight conductors with eight pins that are color-coded. Four pairs of eight wires, one for each positive and negative polarity, are utilized. The pin and color scheme used in conventional and standard wire are described in the table below

What are the materials needed in creating network cable?

The cabling system has one or more pairs of twisted insulated copper wires in a single sheath. It is the most common cabling system in data and telecommunications.

A lightweight, portable instrument that is used by professionals, often electricians, to remove an electric wire’s protective covering before replacing or repairing the wire.

A tool for joining two pieces of metal together by deforming one or both of them so that they hold each other. A crimp is the name given to the tool’s finished product.

Since Ethernet cable is typically offered on loops of various lengths, you might have to calculate and cut the precise amount.

To remove the outer jacket, use your cable strippers 1-2 inches from the cable’s end.

Step 2 – Cut off the outer skin

Make a shallow cut in the skin with a utility knife to remove 1 to 2 inches (2.5 to 5.1 cm) of the outer skin off the end of the cable wire.

The jacket should just slide off the cable when you run the knife around it. There will be 4 exposed pairs of twisted wires, each of which will be a different color or combination of colors.

To reveal the cable core, fold the ends of each pair of wires backward.

Remove the core and throw it away.

Place the untwisted wires in a row in the direction they will enter the RJ-45 connector, moving from right to left.

To get the untwisted wires to the right length, hold the RJ-45 plug up against the cables.

Take your time when trimming the wires and keep checking for a snug fit. Cut the untwisted wires a few times rather than having to start over because you chopped off too much.

Step 8 – Plug wire into the Connector

Make sure the wires are aligned and inserted into the RJ-45 connector’s separate channels according to their colors.

Make ensure that each wire is threaded all the way to the very top of the RJ-45 connector. If you don’t make these checks, you will discover that your freshly crimped RJ-45 connector is unusable, and you will have wasted your time.

Step 9 – Crimp the connector to the cable

To make sure the connection is correct, recrimp the cable.

Crimping an RJ-45 connection onto the other end of the cable can be done by following the methods given above.

Test the RJ45 cable with LAN tester to make sure the crimping has been done properly .

The 6P4C modular connector is standard form.It is identical to an RJ11 connector but uses two telephone cable lines and can be used as a modem port in a computer.

It supports 25 telephone lines with 50 conductors. It is mainly operated in large network. It operates many switches and devices in networks.

RJ48 is 8pin modular jacks & twisted wire cables for data transmission. Its pin out is different from RJ45 connector.

It uses an 8P8C connector to link network equipment’s twisted-pair cables, unlike RJ11.

The RJ45 connector, is a  standard for connecting computers to LANs (LAN). This type of connector was initially developed for use with telephones but has now found widespread use beyond the realm of telephone talks.

Ethernet connections are more secure and reliable than wireless networks like (WiFi) and they also tend to be faster. Also RJ45 has high reliability &good security.

When a straight-through cable is used?

When a cross over cable is used?

What is Marshalling Cabinet?

Various types of Network Topologies and its Advantages and Disadvantages

Different Types of Cables in Instrumentation and its Applications