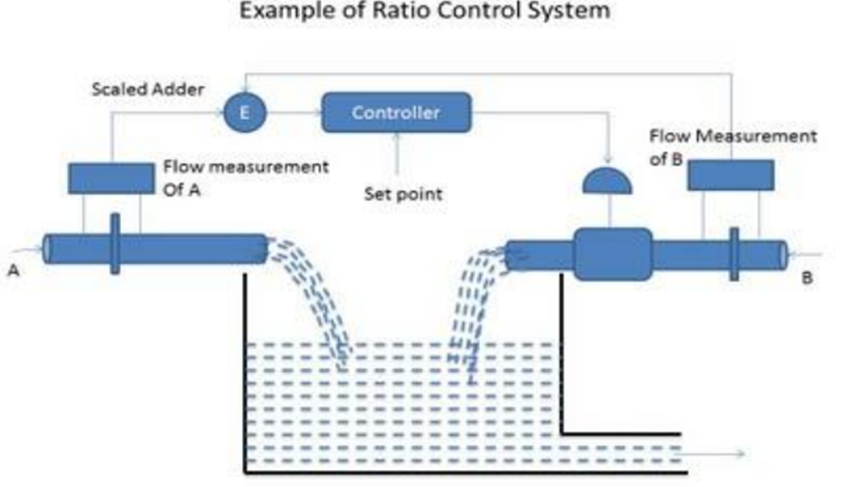 What is Ratio Control?

Ratio control can be defined as a type of feedforward control and it is widely used in the process industries. The purpose of the Ratio control is to maintain the ratio of the two-process variable at a specified value. Basically, this is a type of feed-forward control where two disturbances are measured and held in a constant ratio to each other. Mostly the process variable which is to be controlled would be flow rate, manipulated variable, and also a disturbance variable. So by using this type of control we can make sure that the two or more flows (mixed flow) are kept at the same ratio even there are flow variations.

In this type of control, an uncontrolled flow would determine the second flow, so that we can maintain the desired ratio between them. The ratio factor would be set by a ratio relay or multiplying unit and this would be located between the flow transmitter and the flow controller setpoint, as we can see in the below image.

Flow B is controlled to the preset ratio of flow A

What are the major functions of the Ratio Control?

How does the ratio control work?

Ratio control would keep the flow of two or more streams at a constant ratio. In certain cases, the control of one stream could be difficult and in that case, the flow would be measured and after that, the flow rate of the other stream will be controlled. The flow rate of the stream which is uncontrollable is called the wild stream. In case you need to control the flow rate of two-stream, then both the flow rates would be measured and their ratio would be taken. Then this ratio would be compared with the desired ratio and the difference between these ratios would be used to create the actuation signal for the ratio controller. In the ratio control, the signal from each transmitter or sensor must change linearly with the flow. Mostly it would connect the two flows in order to maintain a constant ratio.

How to do the Ratio Control?

The flow rate of d and u will be measured, after that Rm will be calculated using the below-shown formula

In this method, the disturbance stream (d) would be measured and transmitted to the Ratio station (RS). Then the RS would multiply this signal with an adjustable gain (Kr). The output of the RS would be used as the setpoint (Usp) for the flow controller which would adjust the flow rate of the manipulated stream (U).

What is Series and Parallel Ratio Control?

So the advantage of this type of control is that the system will be independent and any electrical noise in one loop won’t affect the other one. The Parallel method is the most reliable method of ratio control when there is a change in the processing load.

When should we use Ratio Control?

Mostly the ratio control is used to maintain the flow rate of one stream in a process at a specified rate relative to that of another. It is used in a process where two variables and two parameters must be maintained in a particular ratio, even if the value of the output changes

We can use Ratio control for these cases

What is the difference between Feed Forward and Ratio Control?

In a Feed-Forward control, the information that concerns one or more conditions that could affect the control variable is converted into corrective action. In the case of the ratio control, two flows would be measured and they would be kept at a constant ratio with each other.

In this image the ratio of the two reactants needs to be controlled, one of the flow rates is measured but allowed to float, which is not regulated. The outer flow rate would be measured and adjusted to achieve the desired ratio control. The flow rate of reactant A is measured and added with appropriate scaling, to the measurement of the flow rate of the B. The controller would react to the resulting input signal by varying the control valve in the reactant B input line.

How can we do the Ratio Control of gaseous material?

What are the advantages of Ratio Control?

What are the disadvantages of Ratio Control?

What are the applications of Ratio Control?

What is, IoT and IIoT and how does it work?