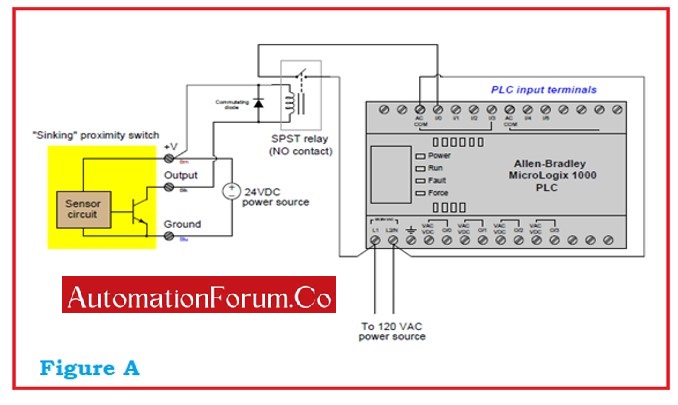 What is Interposing Relay (IPR)?

Interposing Relay operation is discussed in two different cases as shown below.

Here in this case we are operating a PLC with a contactor with a single-phase AC supply.  The PLC relay is DC type with an output voltage of 24 V. But we need a DC type interposing relay with a coil voltage of 24V DC but the contact AC type with 230 V.

The PLC operates interposing relay in the first stage & Contactor through its Auxiliary contacts.

The PLC relay can only avail 1A at 110 VAC, but the relay connected to the controller needs 3A at 110 VAC.

Let us consider an example of a relay used to interpose between dissimilar systems.

A fine toggle switch is used for controlling high-power lamps for an off-road automobile.

In the above-shown circuit diagram, the relay doesn’t execute any logic function but amplifies the dashboard toggle switch signal and sends that signal to the bank of high-power lamps.

A toggle switch of heavy duty is installed inside the dashboard of an automobile to make and break a lamp circuit for safety and reliability purposes.

Working of Interposing Relay in PLC?

What are the functions of IPR?

The function of interposing relay is to separate

What is an IPR cabinet?

Interposing Relay (IPR) cabinet is used in industrial automation systems along with automation devices for proper controlling of load circuits such as Electrical feeder contactors for motors & compressors, Air Conditioning systems, Lamps, Fans, etc. It can be used to control light circuits and AC circuits.

Why is the IPR panel used?

Interposing relay panels in industrial control are used to communicate the signals and status between the Automation system such as DCS & PLC and electrical modules in Machine control centre (MCC) such as motor control units, motors, pumps, lamps, and so on.

What are the Applications of Interposing Relay?

Interposing relays in Industrial Automation systems are used to

What are the Advantages of Interposing Relay?

What is Ethernet IP Protocol?

What is a Multiport Valve?

PLC learning Series 1: What is PLC? Functions of PLC

What is Sequential Function Chart?