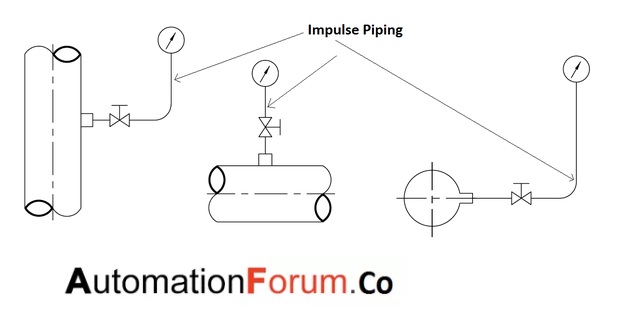 What is  impulse piping?

An impulse line is a small-gauge pipe that is used to connect a point in a pipe in which the pressure is measured at a
instrument. In flow measurement using a primary device such as an orifice plate, nozzle or Venturi meter, impulse lines are used to connect upstream and downstream (or throat) points of the meter to a secondary device for measuring the differential pressure.

What are the things to remember before designing a impulse line

• Impulse-line diameter and length
• Location of the secondary device relative to the primary device
• Routing of the impulse lines between the primary and secondary devices, including the slope
• Location of pressure tappings
• Effects of ambient temperature, temperature gradients and fluctuations, and the associated need for heating
or insulation
• Fluid in the impulse lines
• Valves and connections for venting and draining
• Isolation valves
• Avoiding impulse-line blockages

If the impulse lines are filled with liquid, it is possible that this liquid will freeze in cold weather conditions. This possibility depends, of course, on the type of liquid that fills the impulse and cold weather lines in that geographic location.

What are the problems caused in the impulse lines?

The use of impulse lines is known to cause a number of problems that can lead to an incorrect measurement. The
problems can arise from the following:

1. Damping of the pressure signal or resonances (this problem is exacerbated if a transient measurement is required
or if the lines are of different length)

4. Different temperatures (and therefore different densities) in a pair of impulse lines

5. The fluid in the impulse lines being of a different composition from the fluid in the pipe (this causes a particular
problem in a vertical meter when a gravity head correction or some other approach is required)

6. Condensation in an impulse line that is intended to be filled with gas

7. Gas bubbles being trapped in an impulse line that is intended to be filled with liquid, or boiling of a liquid with a
bubble point below the ambient temperature

One protection against the impulse line is to trace the impulse lines with some form of active heating, with steam and electric being the most common. The “vapor tracing” consists of a copper tube that transports steam at low pressure, wrapped together with one or more impulse tubes, enclosed in a thermal insulating jacket.

The steam flows through the shut-off valve, through the tube in the insulated package, transferring heat to the impulse tube as it passes. The cooled vapor condenses in water and accumulates in the vapor trap device located at the lowest elevation in the steam tracing line. When the water level accumulates to a certain level within the trap, a floating valve opens to vent the water. This allows more steam to flow into the tracking tube, keeping the pulse line continuously hot. The steam trap also acts as a kind of thermostat, although it only detects the condensed water level and not the temperature. The speed at which the steam condenses in the water depends on how cold the impulse tube is. The colder the impulse

Tube (caused by colder environmental conditions), more heat energy extracted from the steam, and consequently, the faster rate of steam condensation in the water. This means that water will accumulate faster in the steam trap, which means it will “purge” more often. The most frequent purge events mean a higher vapor flow in the tracking tube, which adds more heat to the tube bundle and increases its temperature. Therefore, the system is regulated naturally, with its own negative feedback cycle to maintain the temperature of the package at a relatively stable point5.
The following photograph shows an image of a steam trap:

The steam traps are not infallible, they are susceptible to freezing (in very cold climates) and they open (using steam when venting it directly into the atmosphere). However, they are generally reliable devices, capable of adding enormous amounts of heat to the impulse tubes to protect them against freezing.
Power trace lines are an alternative solution for cold weather problems. The “path” used is a double cable (sometimes called heat tape) that acts as a resistive heater. When energy is applied, the cable is heated, imparting thermal energy to the impulse pipe with which it is included. The following photograph shows the end of a section of electric heating tape, with a power of 33 watts per meter (10 watts per foot) at 10 degrees Celsius (50 degrees Fahrenheit):

Both steam and electrical heat tracing are used to protect instruments themselves from cold weather freezing, not just the impulse lines. In these applications it is important to remember that only the liquid-filled portions of the instrument need freeze protection, not the electronics portions

Different kinds of sensors and their application