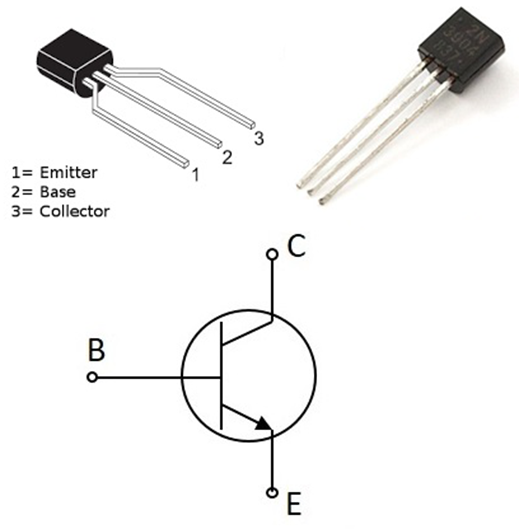 What is a transistor?

The transistor is an active component and a semiconductor device that is used as an amplifier to amplify the high- and low-level signals and utilized in oscillators, detectors, modulators as well as it can be employed as an electrically controlled switch in digital circuits. So, in simple words, it can be said that a transistor is a miniature form of a device that can be used to regulate or restrict the flow of electronic signals.

Transistor has become the most important element in modern electronics. Transistor was developed in the year of 1947 by three American physicists, named Walter Brattain, John Bardeen, and William Shockley.

There are various types of transistors and they are classified based on their structure. Each type of transistor has its own characteristics and different application. On a broader scale, the transistor is classified in the below categories

PNP transistor is in, active or ON state when the current at the base terminal is kept low with respect to that of the emitter. Hence, in the PNP transistor, the base is always negative with respect to the emitter and collector terminals. The current that enters the base is amplified before reaching the collector terminal. The emitter-base junction is forward biased as the collector-base junction is reversed biased.

The PNP transistor is denoted as ‘PNP’ and the diagram below is the symbol of the PNP transistor. The conventional current flow is indicated by the arrow symbol and the current will be directed from the emitter terminal to the collector terminal of the transistor.

Below is the structure of a PNP transistor where the forward-biased emitter pulls the electrons to the source (battery) so that the current can flow from the emitter to the collector terminal.

The standard equation for the current flowing in this transistor is:

The construction structure of the NPN transistor is given below:

Source: This is the terminal of FET through which the majority of carriers enter the bar. Hence, it is named as Source.

Drain: Through this terminal, the majority of carriers lead the bar.

Gate: These are two heavily doped terminals that are internally connected which form the PN-junctions.

For the sake of understanding the fabrication process of N-channel JFET, a narrow bar of N-type semiconductor is considered here, and P-type material is produced on the opposite side of the bar by a diffusion process. Both the sides are joined to make a single connection through the gate terminal which is depicted in the figure below:

At the two ends of the n-type semiconductor bar, an ohmic contact is made and these form the source and the drain. Both the terminals may be interchanged. The symbolic representation of N-channel JFET is shown below:

The electric current (holes) can flow freely within the central P-channel even when no voltage is applied to the gate terminal of a P-channel JFET. This is the reason why JFETs are called ‘normally ON’ devices as the current can pass across the source to drain even without any voltage.

The construction of P-channel JFET is depicted below figure:

MOSFET: MOSFET is abbreviated by Metal Oxide Semiconductor Field Effect Transistor which is very popular in the transistor family. It comprises four terminals, Source (S), Drain (D), Gate (G), and Body (B). MOSFET can be employed in both analog and digital circuits. The general construction of MOSFET is shown below in the figure.

As the Gate region of MOSFET is totally insulated from the Source-Drain region, it is often called Insulated Gate FET. In this transistor, the body or substrate is the main Semiconductor (Silicon) in which the fabrication of FET is done. The MOSFET functionality depends on the variations in electric current that occurred in the channel width as well as the flow of the charge carriers; either electrons or holes. Through the source terminal, the charge carriers enter and come out from the drain. The below figure shows the symbol of MOSFET.

Voltage is applied on an electrode called the gate which controls the width of the channel. MOSFET functions in two modes:

Depletion Mode: In this mode of operation, the channel has maximum conductance when no voltage appears across the gate terminal, whereas when the voltage is either positive or negative across the gate, the conductivity in the channel decreases.

N-channel MOSFET: In this type of MOSFET, N-channel is present between source and drain. Here, the source and drain terminals are doped heavily by n-type material which is placed in the p-type semiconductor layer, or substrate which is heavily doped.

Here, electrons are only responsible for the current flow between the source and drain zone and the current flow is typically controlled by the gate voltage. The below figure depicts the symbol of N-channel MOSFET.

P-channel MOSFET: Here P-channel is present between the source and drain. P-type materials are used for doping the source and drain terminals, whereas the N-type materials are used for doping the substrate. Here, holes are the majority carriers that cause the flow of current and the current flow is controlled by the voltage applied across the gate terminal.

The symbol of P-channel MOSFET is shown below:

There are various types of transistors available, but for the sake of understanding, a common emitter configuration of NPN transistor is considered here. In this type of transistor, the emitter region is wider and highly doped as the number of majority carriers (electrons) is huge here. The collector region is comparatively less doped and so here the number of electrons is not as much as in the emitter region. The base region is quite thin as is lightly doped and diffused in between emitter and collector. The number of holes (majority carriers) is quite little here.

Now, in this situation, if we connect a battery in between the emitter and collector, the emitter region will be connected to the negative terminal of the battery. Hence, the emitter-base junction is forward biased and the collector-base is reverse biased. In this mode of operation, no current flows through the transistor device. In actual practice, as the emitter region is heavily doped, the concentration of free electrons in this region is large. On the other hand, the base region is thin and there are very few holes. The collector region is comparatively wider and moderately doped.

When a voltage is applied between the emitter and collector, the entire voltage is dropped in two places; one is at the emitter-base junction at the forward barrier potential region which is about 0.7V in the case of silicon transistor and the other drop occurs at the base-collector junction at reverse barrier region. No matter what is the applied voltage, the voltage drop across the emitter-base junction always remains constant and is 0.7V, and the rest of the voltage drops across the base-collector junction. As a result, the collector voltage can never overcome the forward potential and no free electron can cross the barrier in the emitter region and come to the base region. At this condition, the transistor behaves like an off switch.

There are two major procedures for making transistors:

a) Alloy Diffused Transistor: There are varieties of methods through which a transistor can be produced. In this process, a thin wafer of Germanium is used to make the base terminal of the transistor. Two pellets of Indium are diffused to either side of a wafer of the N-type base as it is a trivalent material with three electrons at its valence shell to make the collector and emitter terminals of the transistor.

b) Silicon Planar Transistor: Its construction is more complex compared to the alloy diffusion technique. This process requires many separate steps like depositing the oxide layers on the silicon wafer and etching away unwanted silicon areas. To shape the required patterns or layers, the steps are repeated with many variations to form a transistor or integrated interconnected circuits.