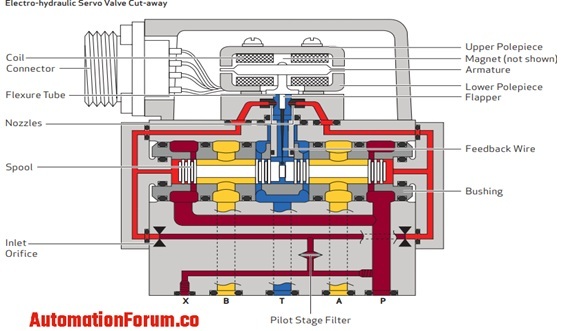 How to select a servo valve?

What are the uses of a servo valve and where do we use it?

Servo valves are used to control the actuator, some actuators must move at a certain speed and it must create a proper force to do the work which they are designed for so by the proper signals and also by the help of feedback devices a servo valve can help the actuator to do all these functions properly. The servo valves are also used in hydraulic cylinders to do control their operation.

The servo valves are used as a control element in the servo system. In a servo system, a low-powered command signal will be compared with output and the error augmented by an auxiliary power source to give a high power drive to control that output. This device is really suitable for this purpose because of the high power density of the hydraulics. By using a servo valve we could get a continuous variation of the flow by varying the input signal. In a proper mechanical servo system, the valve is moved directly by a mechanism or linkage. But the electro-hydraulic servo valve works according to the electrical input and this valve is able to do the continuous control in order to use it for a closed-loop servo system.

In an open-loop circuit, the controller would control the process according to the given input which is given from the controller to the valve. In a closed-loop circuit according to the requirement of speed, position, or pressure input signal is given and it is compared with the output value with the help of a sensor, and after that required adjustments are done. The servo valve has a closed-loop process in which the input signals and the output values are compared and the differences are removed and because of this high accuracy is achieved.

What are the types of servo valves and how do they work?

The mechanical servo valve is a mechanically operated valve and it can control the flow of hydraulic fluid to an actuator. This type of servo valve can be considered as a force amplifier and it can be used for position control. In this valve, a small input force will be provided and this force will shift the valve spool to the right by a specified amount. After that, the oil will flow through the port during this process the hydraulic cylinder will be retracted to the right. The feedback link action would shift the sliding sleeve to the right till it blocks the flow to the hydraulic cylinder. So the input motion would deliver a specified and controlled amount of output motion. In a closed-loop system, the output will be fed back to the input to improve the input. This type of servo valves are used for the hydraulic steering system of automobiles

A hydraulic servo valve is a servo with either a flapper nozzle or jet pipe and they are used to position the servo. The servo valves are used when accurate positioning is required. The position control is achieved by a closed-loop control system as explained above. The closed-loop control system consists of a command sensor, feedback sensor, digital or analog controller, and the servo valve. We can use this valve to control the hydraulic actuators or hydraulic motors. The major components in a servo valve are a torque motor, flapper nozzle, jet pipe, and one or more spools.

These valves are mostly used for applications that need variable and accurate flow. These valves operate by transforming a changing analog or digital input signal into a smooth set of movements in a hydraulic cylinder.

What are the types of servo valve control system?

We can consider the force or torque as the function of the load on the actuator, servo valve can control the force in a circuit. The pressure transducer can sense the force. The servo amplifier would check the feedback signal from the sensor and this amplifier controls the valve and the valve is shifted with the help of a velocity circuit to acquire the desired pressure.

This type of control system is used with motors and also with cylinders. The amplifier would calculate the velocity so that an error signal can be sent. So if the error is zero in this circuit the spool will be shifted metering the flow to and from the actuator.

What are the advantages and disadvantages of servo valve?

What are the applications of servo valves?

What is output tracking and Setpoint tracking?