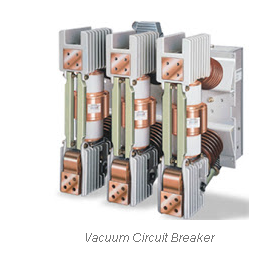 A circuit breaker is a device that interrupts an electrical circuit to avoid unwanted currents, caused by a short circuit, which generally results from an overload. Its basic functionality is to interrupt the flow of current after a fault is detected.  A vacuum circuit breaker is such kind of circuit breaker where the arc quenching takes  place in vacuum. The technology is suitable for mainly medium voltage application. For higher voltage vacuum technology has been developed but not commercially viable. The operation of  opening and closing of current carrying contacts and associated arc interruption take place in a  vacuum chamber in the breaker which is called vacuum interrupter. The vacuum interrupter consists of a steel arc chamber in the centre symmetrically arranged ceramic insulators. The  vacuum pressure inside a vacuum interrupter is normally maintained at 10 – 6 bar.The material used for current carrying contacts plays an important role in the performance of the Vacuum circuit breaker. Cu-Cr is the most ideal  material to make VCB contacts.

The main aim of any circuit breaker is to quench arc during current zero crossing, by  establishing high dielectric strength in between the contacts so that reestablishment of arc after current zero becomes impossible. The dielectric strength of vacuum is eight times greater than that of air and four times greater than that of SF6 gas. This high dielectric strength makes it possible to quench a vacuum arc within very small contact gap. For short contact gap, low
contact mass and no compression of medium the drive energy required in vacuum circuit breaker is minimum. When two face to face contact areas are just being separated to each other, they are not done so instantly. Instead, as the contact area on the contact face is being reduced and ultimately comes to a point and then they are finally de-touched. This happens in a fraction of micro second. At this instant of de-touching of contacts in a vacuum, the current through the contacts concentrated on that last contact point on the contact surface and makes a hot spot there. As the medium is vacuum, the metal on the contact surface gets easily vaporized due to that hot spot and create a conducting media for arc path. Therefore, the material constituting the arc is very small and thus a feeble arc is established even with high current interruption. The arc will be initiated and continues until the onset of next current zero. Th figure below shows the cross section assembly of a VCB.

At the current zero, this vacuum arc is extinguished and the conductive metal vapor condenses back to the contact surface. At this point, the contacts are already separated, so there is no question of re-vaporizing the contact surface for the next current cycle. That means that the arch can not be restored again. In this way, the vacuum circuit breaker prevents the restoration of the arc by producing a high dielectric strength in the contact space after the current zero. There are two types of bow shapes. For the interruption of the current up to 10 kA, the arc remains diffuse and the steam discharge covers the entire contact surface. Above 10 kA the diffuse arc narrows considerably by its own magnetic field and contracts. The phenomenon leads to excessive heating of the contacts in its center. To avoid this, the design of the contacts must be such that the arc does not remain stationary but continues to travel through its own magnetic field. The specially designed contact form of the vacuum circuit breaker makes the steady-state arc travel along the surface of the contacts, causing minimal and uniform contact erosion.

What is Instrument Transformers?

How to calibrate Fieldbus Transmitters ?

What is Instrumentation documentation?