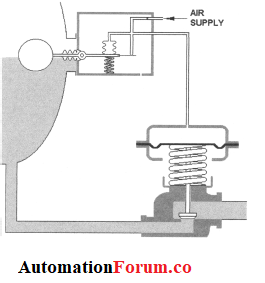 The pneumatic level transmitter has the advantage of no leakage will matter to use in the process industry and the pneumatic signal can be feedbacked to control the pneumatic valve.

The valve and float arrangement so the float arm compresses a spring and the spring force is opposed by a bellows that contains our output pressure.

Flow through the valve doesn’t change based on of the float, it responds to differences between the position of the float and the balance of forces of the spring and the bellows.

As the level increases the nozzle is moved away from the baffle so more air bleeds out at the nozzle. The pressure in the output bellows decreases so the spring pushes down on the float and upon the baffle, following the nozzle.

When the level falls the nozzle is pressed against the baffle so the pressure increases and the bellows the spring to push the baffle down.

The transmitter uses a pressure balance principle where the output pressure of the transmitter is feedback to restore the balance of the device, in this case the relative position of the nozzle and baffle

This transmitter is of reverse action, the output increases as the level decreases. In the figure, the valve is draining the tank so that the level falls. The same transmitter can be used for the direct control of a replacement water valve that feeds a boiler feed tank because we could change the internal valves