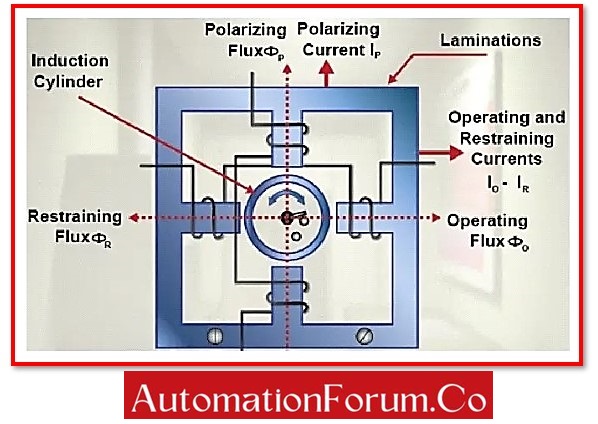 The stationary iron core performs the function of a stator, which has two, four, or more poles. Typically, it is built to accommodate 4 or more poles.

Similar to a disc relay, the hollow cylindrical cup functions as a rotor. In the space between the stationary iron core and the electromagnets, it can freely rotate.

Magnetic fields are created by electromagnets. It consists of two pairs of coils, which produce flux when they are powered. Even if they are separated from one another by an angle, these fluxes will have the same frequency.

Coils will energise the iron core, creating a revolving flux in the air gap.

Eddy currents are created to flow in the rotor as a result of fluxes energised by coil. As a result, a force that affects the rotor will be created. As the induction motor’s rotor, the hollow cup revolves in the direction of the magnetic field created by the magnets and the stationary iron core.

As a result, the trip circuit’s fixed contacts close and the breaker receives a trip signal to open the circuit. To prevent the rotor from rotating constantly, a control spring backstop is attached to the cup’s spindle.

1. The torque to weight ratio of induction cup relays is extremely high.

3. Because of the light rotor, they operate very quickly; the working duration is less than 0.10 seconds.

1. Directional and distance relays in transmission and distribution lines use induction cup relays.

What is a Condition Monitoring System?

what are pressure relief valves?