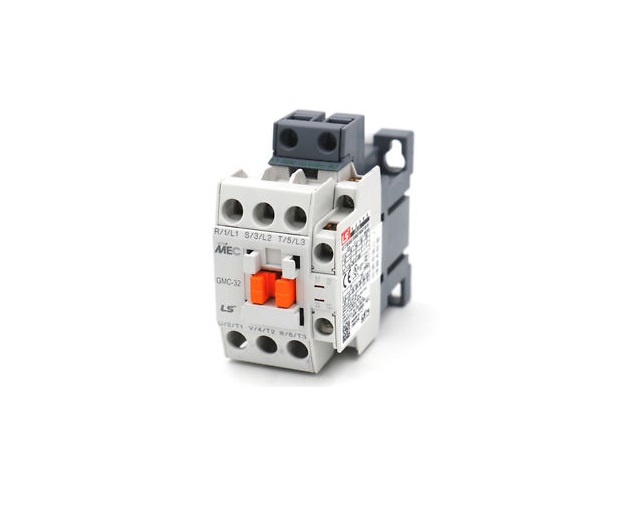 Most motor applications require the use of remote control devices to start and stop the motor. Magnetic contactors,
similar to the ones shown below, are commonly used to provide this function. As discussed later in this course, some magnetic contactors are used to control the distribution of power in lighting and heating circuits.

Like many other control components, contactors are most often manufactured to specifications provided either by the National Electrical Manufacturer’s Association (NEMA) or the International Electrotechnical Commission (IEC).

Magnetic contactors utilize basic electromagnetic principles. To understand these principles, consider a simple electromagnet fashioned by winding a wire around a soft iron core and  connecting the coil to a DC voltage source. Current flowing through the wire temporarily magnetizes the iron core coil. When the coil is disconnected from the DC voltage, the current stops and the iron core coil returns to its nonmagnetic state.

When current no longer flows through the control circuit, the electromagnet’s coil de-energizes, the magnetic field collapses, and the movable contacts open under spring pressure.

The following line diagram shows a contactor that provides on off control for a three-phase motor. Note that the power to the electromagnetic coil of this contactor is controlled by SW1. When SW1 closes, the electromagnetic coil energizes, closing the “M” contacts and applying power to the motor. When SW1 opens, the coil de-energizes, opening the “M” contacts and removing power from the motor.