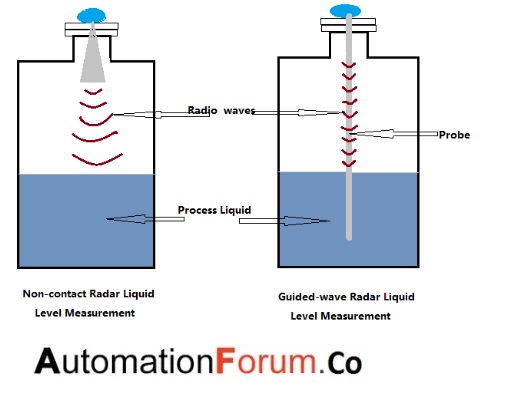 The radar instruments work by transmitting high frequency electromagnetic radiation (GHz) and synchronizing the transit time with the level surface.and back In this sense, they are similar to ultrasonic level instruments.However, radar has an advantage over ultrasound because of the inherent sound limitations. Sound waves are a form of mechanical energy that uses the molecules in the atmosphere to propagate. However, changes in the chemical composition of the atmosphere causes the speed of sound to vary.For example, vapors are a typical cause of error in ultrasonic level measurements because they change the speed and the force of propagation.

There are two types of radar level instruments: non contact and guided wave (as shown in Figure).

In the non-contact type shown in Figure a, the electromagnetic energy output of the radar antenna is very weak, typically around 1 mW. After the radar signal is transmitted to the air, it begins to weaken and spread very rapidly. The signal reaches the surface of the liquid where it is reflected back to the instrument. The intensity of the reflected signal is directly related to the dielectric constant of the liquid. Liquids with very low dielectric constants, such as hydrocarbon fluids, reflects very little of the signal. Upon returning to the instrument, this weak signal loses more energy until the received signal can be less than 1 percent of its power in the initial transmission. The turbulence of liquids and some foams can further complicate the measurement by dispersing or absorbing the radar pulse.

The guided-wave radar unit shown in Figure b can overcome these problems. It is based on Time Domain Reflectometer (TDR) technology, which uses pulses of electromagnetic energy that are transmitted down
the probe tube. When a radar pulse reaches a liquid surface that has a higher dielectric constant than the air in the process tank, the pulse is reflected back to the electronic unit. A high-speed electronic timing circuit precisely measures the transit time and calculates an accurate measurement of the liquid level in the tank. The power output of the guided-wave radar probe is only 10 percent that of a conventional radar probe. This is possible because the wave guide
offers a highly efficient path for the signal to travel down to reach the surface of the liquid and then bounce back to the receiver. Degradation of the signal is minimized. This means that you can accurately measure the level
of liquids that have low dielectric constants of less than 1.7. Variations in media dielectric constant have no significant effect on performance. Guided-wave radar level probes, like conventional radar probes, use transit
time to measure the liquid level. The transit time for a signal reflected from a surface of hydrocarbon liquids with a dielectric constant of 2 to 3 is the same as the transit time for water with a dielectric constant of 80. Only
the strength of the return signal is changed. Guided-wave radar level probes only measure transit time.
Since the speed of light is constant, no level movement is necessary to calibrate a guided wave device. In fact, you do not have to calibrate the instrument. You perform field configuration by entering process data into the
instrument for the specific level application. You can configure several instruments in very quickly. All that is required is a 24 Vdc power source and the specifications for each process tank.