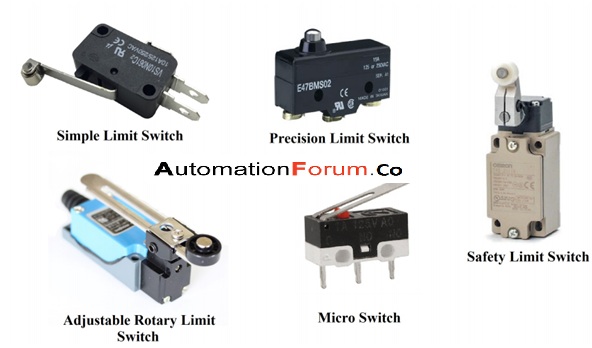 A limit switch is an electromechanical device, and it can be considered as a contact sensor that is widely used in many industries to detect the position or presence of an object. This device has good precision and repeatability and it is because these switches make direct contact. So these switches are used in many industries and they can be seen at the end of the mobile element such as a conveyor belt. This switch is capable to detect the presence or movement of an object, it can also determine the passing and end of travel of the object. The limit switch has an actuator so when the device is in contact with the actuator, then the contacts will be operated by the switch so that it can create or break an electrical connection.

What is the need for a limit switch?

These switches are widely used and they are used in many applications because it is very easy to install and they are reliable too. It can also detect the presence of an object or its passing. The position of an object can also be determined by using a limit switch. These switches have a high current capacity, this switch also has good precision, snap action operators and it can provide accurate operations. These switches are small in size so it can be used where space is a constraint.

How does a limit switch work?

What are the components of the limit switch?

The major components in the limit switch are actuator, head, contact, terminal block, switch body, and base.

How to select a limit switch?

What are the types of limit switches?

The snap switch would trigger so quickly when the actuator moves, these switches can also work without an operator and these switches are mostly used for applications that require basic contact, these devices are used to detect short movements.

This limit switch is really small and it costs very less and die-cast zinc is used to create it. This limit switch has a sealed reed contact and because of this it is capable of high contact reliability and it can also be used where environmental stress is high.

How to connect the limit switch to a CNC system

By using access lugs we can connect the wires from the limits witch to the computer and from there the CNC software can perform according to switch trips.

What are the advantages of a limit switch?

What are the disadvantages of a limit switch?

What are the applications of a limit switch?

How to check if the earthing is properly done in our home?

What are Auxiliary Current Transformers ?