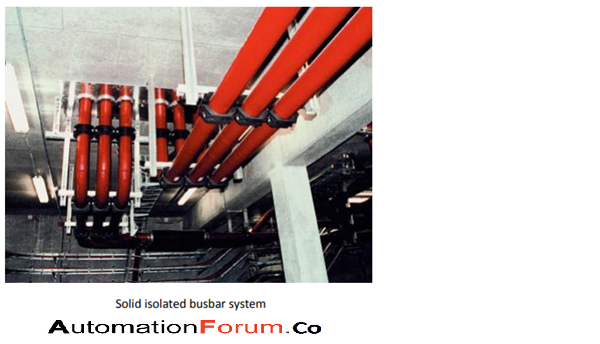 Bus-bars are mostly used to interconnect the loads and sources of electrical power. It does the connection of incoming and outgoing transmission lines. It also does the connection between the generator and the main transformer of the power system. A bus-bar is a strip of copper or aluminum that conducts electricity within a switchboard, distribution board, substation or other electrical apparatus. Bus-bars are either flexible or rigid. Flexible bus-bars are made up of aluminum tubes and are supported by disc insulator strings on both sides with the gantries. Rigid bus-bars are made up of aluminum tubes and it is supported on post insulators.

The bus-bar size determines the maximum amount of current that can be safely carried. They are either flat strips or hollow tubes these shapes will allow heat to dissipate more efficiently due to their high surface area to cross-sectional area ratio.

When several feeders or generators operating at the same voltage have to be directly connected to each other so in that case bus-bars are used as the common electrical equipment bus-bars can provide operating flexibility, cost reduction or sufficient reliability

How bus-bars can be rated

How to select Bus-bar

Some factors must be considered before selecting the bus-bar size such as normal current carrying capability, surface gradient, corona free performance. It must be selected by considering the electrical and mechanical stresses such as short circuit fault currents and it should be able to withstand the thermal stresses under short circuit the clamps and connectors are also stressed

This arrangement consists of one main bus which will be energized at all times and all the circuits will be connected to this, and this kind of arrangement only provides the least amount of reliability. Bus faults or failure of circuit breaker operation under fault condition could result in complete loss of the substation

It can be said as an extension of the single bus arrangement it consists of two or more single bus schemes and each of them will be tied together by the bus sectionalizing breakers. These breakers can operate open or closed according to the system requirements. If any bus fault or breaker failure occurs the affected bus section can be removed and prevents the total substation shutdown.

This configuration consists of two independent buses and the main bus is normally energized under normal operating conditions and all the incoming and outgoing circuits are fed from the main bus through their circuit breakers and switches. If a circuit breaker needs to be repaired then the circuit operation integrity can be maintained by the use of bypass and bus tie equipment

It is an extension of the sectionalized bus arrangements and it is accomplished by interconnecting the two open ends of the buses through another sectionalizing breaker and it would result in a closed-loop or ring with each bus section separated by a circuit breaker. For better reliability and operational flexibility, each section must supply only one circuit. If a fault occurs in a bus or in circuit breaker only limited bus section and circuit will be removed.

Advantages of a ring bus system

Disadvantages of a ring bus system

Breaker and a half

Advantages of the breaker and a half system

Disadvantages of the breaker and a half system

What is switchgear and its types