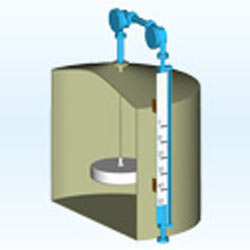 What is a float level detector?

The float level detector is used to measure liquid levels in a tank in which a float rests on the surface of the liquid and follows the changing level of the liquid.

The Level Gauge consists of a level detecting float, transmitting parts (tape, guide elbow, etc.) and the instrument body. The indicator body comprises the sprocket pulley, tape winding pulley, constant torque spring, gear mechanism, pointer and scale plate. When a transmitter is provided for the level gauge, the transmitter is connected to the sprocket pulley shaft of the indicator body through the coupling mechanism.

There are two forces acting on either side of the pulley. The weight of float and the counterweight ( spring ). As the level rises, the liquid immerses the float and the float losses some of its weight. Now the force of the spring. It pulls the cable and lifts the float.

When the float rises and lowers, according to the change in the liquid level, the tape which is interlocked with the float rotates the sprocket pulley, which in turn is engaged with the punched tape.

The rotation corresponds to the upward or downward movement of the float. Thus, any change in the level of the liquid is converted to the change in the rotation angle of the sprocket pulley shaft. This rotation angle of sprocket pulley is transferred to transmitter unit, i. e. Microswitch alarm, pneumatic, electric, digital BCD etc. through coupling unit for remote data transmission.

How to measure level using float for turbulent liquid?

If the liquid inside the vessel is subject to turbulence, guide wires may be necessary to keep the float cable in a vertical orientation. The guide wires are anchored to the floor and roof of the vessel, passing through ring lugs on the float to keep it from straying laterally. One of the potential disadvantages of tape-and-float level measurement
systems are fouling of the tape (and guide wires) if the substance is sticky or unclean.