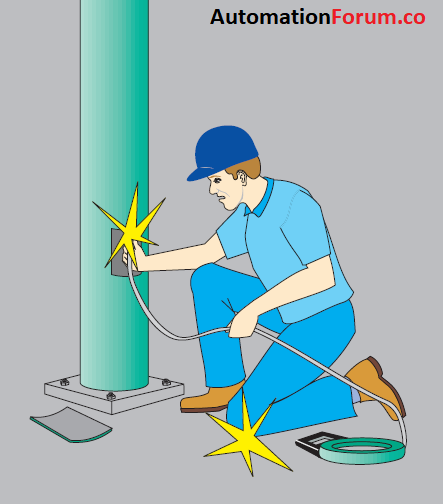 Electricity is an important energy source in the modern world, it is safe to use but dangerous in the wrong hand. It may cause fire, damage and fatal or non-fatal accident to personal. This type of accident can be avoided and ensure electrical safety by using good quality equipment, material and proper wiring.

What is an electrical shock?

These can cause muscle contraction, chemical burn, electrical burn, injuries to tissue and Breaking the bones.

An electric current travels in a closed circuit through conductors, water, metal, the human body. It could flow through the body unintentionally in one of the two situations. If an undesirable electric current enters and leaves the body through contacts on a limb such as a hand, arm, or foot, this is called a macro-shock hazard.

If in any way an electric current passes through the body with a direct electrical contact on the heart, this is called a micro-shock or cardiac shock hazard.

What is overload current?

When a current exceeds the current rating of equipment or wiring, a hazard exists, this is overload in a current. The overload current increases through the line melt the wire and also cause overheating, but the high temperature of the conductor can also cause a fire.

The electrical circuit breaker and fuses are used to circuit from overcurrent. These devices open a circuit automatically if they detect current in excess of the current rating of equipment or wiring. This excess current can be caused by an overload, short circuit, or high-level ground fault

Proper grounding in electrical system ensures there is a path of low resistance to the ground if there is an electrical equipment failure. If you get contact with an improperly grounded circuit, you will get shocked. There are two wires in an electrical connection, one the power line and the neutral line. The neutral wire should be grounded.

All circuits and equipment should be grounded.

A GFCI is a fast-acting switch that detects any difference in current between two circuit conductors. If either conductor comes in contact—either directly or through part of your body—with a ground (a situation is known as a ground fault), the GFCI opens the circuit in a fraction of a second. If a current as small as 4 to 6 mA does not pass through both wires properly but instead leaks to the ground, the GFCI is tripped. The current is shut off.

Anybody touching the chassis will have an electrical current going through his body to the ground. In such a situation, instead of all of the current leaving the phase wire passing through the neutral, some is diverted to the ground. This is called a ground fault or earth leakage.

From the power distribution point of view, it is permissible to isolate the two mains wires from the ground in limited areas. Using a transformer the circuit is isolated so that the no shock occurs. Its secondary winding is electrically insulated from the primary and has some other special construction features. “Auto-transformers” commonly available in the market do not have an insulated secondary and they cannot be used for this purpose.

What are the Emergency shutdown procedures?

What is a gas-insulated substation (GIS)?