Protective devices are necessary to protect electrical appliance or equipment against

a)Short Circuit
b)Abnormal variations in the supply voltage
c)Overloading of equipment
d)To protect operator against accidental contact with the faulty equipment,falling which the operator may get a severe shock.

Fuse generally means a fuse wire,placed in a fuse holder.It is a safety device,which protects electrical and electronic circuit against over loads,short circuit and earth faults.

The fuse link or fuse wire is made of low resistivity material and low melting point.

Operation of a Fuse –

Fuse is a short length of wire designated to melt and separate in case of excessive current.

The fuse is connected in the phase of the supply.

It is always connected in series with the circuit / components that need to be protected.

The maximum current that a fuse can carry,without being burnt,is called the rating of the fuse wire.It is expressed in Amperes.

Fuse carrier and channel are made of porcelain or Bakelite material.They are used for all domestic,commercial and industrial application upto 100 A capacity.

This fuse unit is in the form of a cartridge.

Its normally manufactured in the range of 2 A to 100 A.

Whenever the fuse blows off,fuse with carrier is replaced by a new one.

As it is sealed,it cannot be rewired.

Cartridge fuses are used to protect motors and branch circuit where higher amps or volt ratings are required. They are available in wide variety of sizes,amp and volt ratings up to 600 Vac and 600 amps.

Cartridge fuses are used extensively in commercial,industrial and agricultural applications as well as residential fuse panels,air conditioning,pumps,appliances and other equipment. 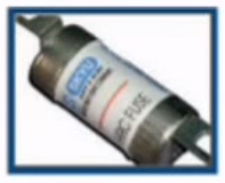 HRC Fuse – High Rupture Capacity fuse unit.It is normally designed for high current.When fuse is blown off,the entire unit is to be replaced by a new one.It cannot be rewired as it is a sealed one.

Characteristics of a good fuse wire

A good fuse wire should possess the following characteristics
a)Low resistivity
b)Low melting point
C)Low conductivity of the metal vapors formed,when the fuse is blown off.

1.They require maintenance
2.They are reliable
3.They operate at high speed.
4.They have consistent performance
5.They clear both low and high fault current with equal efficiency. 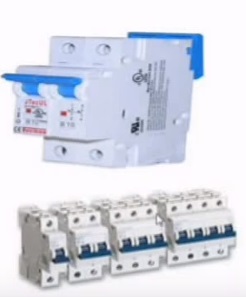 It is safety device which work magneto thermic release principle.It is connected in the phase,between the supply and load.It is manufactured in standard rating of 6A to 40 A.We can see it on the meter board of each and every house.

When the current drawn by load exceeds the rated value,it acts and trips the circuit,the protecting the apparatus,operator and appliance.

1.They act and open the circuit in less than 5 milli seconds.
2.Automatic switch off under overload and short circuit condition
3.No fuse to replace or rewire.It needs no repairs.
4.Supply is restored by resetting it again.

It is the combination of both MCB and ELCB palced in one unit.It acts on both the occasion of   earth leakage and overload and protect the circuit,appliance and the operator.

Connecting the metal body of an electrical appliance,machinery or an electrical installation to earth,through a low resistance wire,is called Earthing or Grounding.

Earthing is necessary for all domestic,commercial and industrial installation to safeguard the operator,tall buildings and machinery against lightning.

Metal body of all the electrical appliances,equipment and machinery,the earth points of all three-pin sockets and the body of the energy meter are connected to earth through a thick G.I. wire.

The high voltage included during lightning  is discharged to earth through grounding wire and thereby building and machinery are protected.