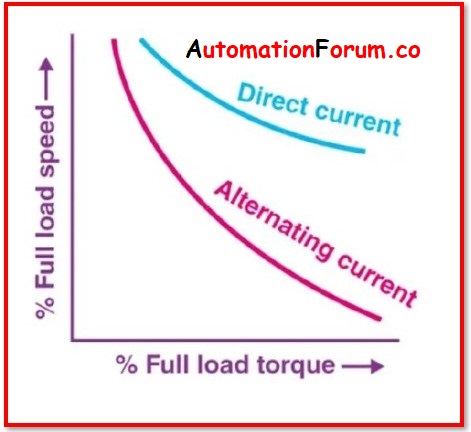 What is Universal Motor?

A unique kind of motor called a universal motor is made to operate on either a single phase of AC power or a DC supply. These motors typically have series wound armatures and field windings, which results in strong starting torque. Because of this, universal motors frequently arrive pre-installed in the machinery they are designed to power. The majority of universal motors are built to function at speeds more than 3500 RPM. Due to the reactance voltage loss that exists in AC but not in DC, they operate at a slower pace under an AC source than they do under a DC supply of the same voltage.

A DC machine’s architecture is remarkably similar to that of a universal motor. Field poles are installed atop a stator, which is what it comprises of. On the field poles are woven field coils.

However, the entire magnetic route, including the armature and the stator field circuit, is laminated. To reduce the eddy currents that operate on AC, lamination is important.

The commutator has brushes sitting on it, and the rotary armature is of the wound kind with straight or skewed slots. Due to the current induced in the armature coils, the commutation on AC is worse than that for DC. Because of this, the brushes that are used have high resistance.

Typically, through bolts are used to secure the field poles to the frame. The frame is frequently built to be an essential component of the machine it supports.

Laminations that are strongly packed together make up the field core. The laminations are made to hold a two-pole motor’s two field poles. The tiny DC motor’s armature is comparable. Essentially, it is a laminated core with either straight slots or slots that are not straight and a commutator to which the armature winding’s leads are attached. The commutator and core are both pressed on the shaft. The ends of the frame are where the end plates are situated. Bearings are housed within plates. A cast end plate is a common feature of universal motor frames. From this kind of engine, just one plate may be removed.

Therefore, universal motors operate on the same principles as DC series motors, whether they are powered by an AC or DC supply.

A universal motor’s speed/load characteristics are comparable to those of a DC series motor. A universal motor’s speed is low under full load and extremely high under no load. Gear trains are typically utilised to achieve the desired speed on the demanded load. The properties of the speed and load apply to both AC and DC supplies. The series motor produces less torque when powered by an AC supply. The direction of rotation can be changed by switching the connections between the fields and the armature.

They are classified into two types:

What are the different methods of Transformer Oil Testing?

What is a Condensate Pot and how is it Installed?

What are transmitters and how is it useful for process industries

Various issues in DP Transmitter & How to Troubleshoot it?

What is a pump?