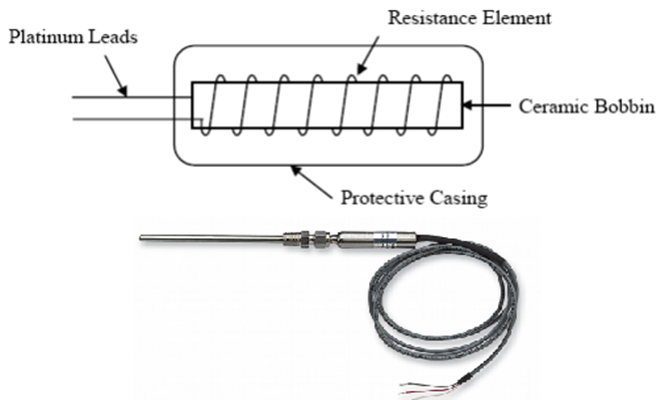 How is an RTD constructed and how does it work?

The RTDs are mostly made of platinum and its resistance would increase according to the temperature. The resistive property of the material is considered to create an RTD of the given value. Platinum is mostly used for the construction of the RTD because it has higher temperature capability and it provides good stability and repeatability. Platinum is not easily contaminated. So an RTD consist of a probe, resistive material, termination, and lead wires.

What is a 2-wire, 3- wire, and 4-wire RTD and how are they different from each other?

The resistance value of the RTD must be transmitted, RTD measurement is not complete without transmitting the resistance. This resistance value should be transmitted to an instrument, mostly copper wires are used to transmit the RTD resistance to the measuring instrument. These copper wires would have their own resistance, this resistance would be added to the measured RTD resistance. If the wire compensation is not proper then it would create many errors. So to avoid this error various types of compensation are provided with various types of wire connection like 3-wire and 4-wire.

In this type of configuration three lead wires would come from the RTD. So in this three-wire configuration, two wires would carry the measuring current, while the remaining wire would act as a potential lead. In this type, an additional wire will be added to one contact of the RTD. In a three-wire RTD both sides would be connected with one lead wire and also one extra wire would be connected to one of the sides. The extra wire which is used should be similar to the lead wire which is used in the RTD, like similar length and resistance. So due to this both the wires would have similar resistance and they would cancel each other.

The 4-wire configuration can be considered as the most accurate RTD measurement. The constant current would be carried out through two leads, while the remaining two are used to measure the voltage drop. So this type of configuration would remove the error which is caused by the mismatched resistance.

When should we use an RTD?

What are the major advantages of RTD?

What are the disadvantages of RTD?

What are the applications of RTD?

RTD can be used for the automatic temperature control of

How to read the electrical diagram, and what are the symbols involved in it?

What is a thermocouple and how do they work?