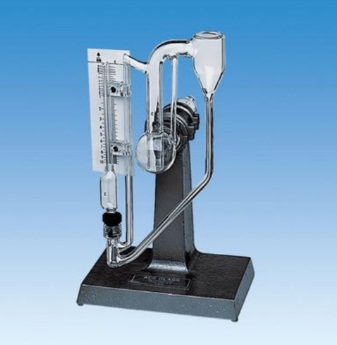 McCLEOD GAUGE is generally used as a primary standard for the measurement of high vacuum (low pressure) and is simple to use. It was invented in 1874 by Herbert McCleod.

McLeod gauges operate by taking in a sample volume of gas from a vacuum chamber, and then compressing it by tilting, and infilling with mercury. The pressure in this smaller volume is then measured by a mercury manometer, and, by knowing the compression ratio, the pressure of the original vacuum can be determined.

The McLeod Gauge is used to measure vacuum pressure.

Advantages of the McLeod Gauge

(i) It is independent of the gas composition.
(ii) It serves as a reference standard to calibrate other low pressure gauges.
(iii) A linear relationship exists between the applied pressure and h
(iv) There is no need to apply corrections to the McLeod Gauge readings.

(i) The gas whose pressure is to be measured should obey the Boyle’s law
(ii) Moisture traps must be provided to avoid any considerable vapor into the gauge.
(iii) It measure only on a sampling basis.
(iv) It cannot give a continuous output

Selection of a pressure gauge

What is Resonant Wire Pressure Transducer?