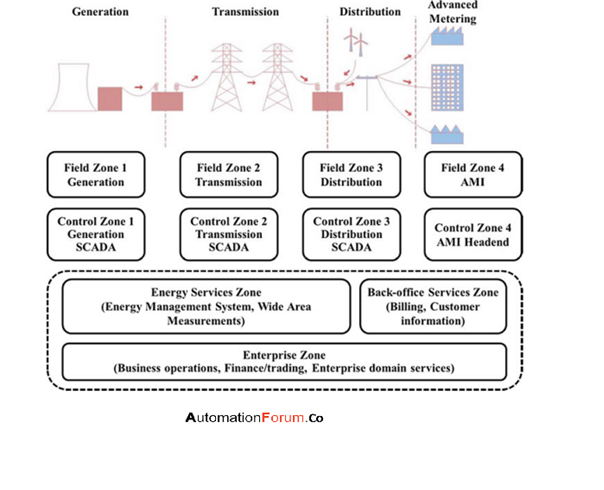 An industrial control system is a combination of a variety of systems like computers, electrical and mechanical devices. It can be considered as the combination of several control systems such as supervisory control and data acquisition (SCADA) systems, distributed control systems (DCS), and programmable logic controllers. They are used to provide automated or partially automated control of the equipment in manufacturing and chemical plants, electric utilities, distribution and transportation systems, and many other industries. It can also be described as the automatic regulation of unit operations and their associated equipment as well as the integration and coordination of the unit operations into the larger production system. ICS is used in manufacturing operations and it can also be applied to material handling.

What are the different types of operational zones in ICS

Industrial control systems are very complex, they can be used to control the complex processes in real-time with the help of many components. In order to control the operation process, ICSs are divided into three operational zones they are.

This zone comprises of business network and enterprise systems, it has many endpoint devices that evolve rapidly and are upgraded continuously. The business network is commonly based on the IP protocols and it will be connected to external networks and the internet. These networks are usually kept separate from the operational networks used in other zones.

In this zone, it has a distributed control system like the SCADA systems. This zone includes the control room environments. This zone has a network-based IP protocol just like the enterprise zone. The devices in this zone are not often updated and the network has some time constraints and because of this only a few cyber-security uses this zone.

Operational zones in the smart grid

How does an industrial control system operate

The basic operation of ICS

Control loop – control loop has sensors for measurement and they have controller hardware like PLC, actuators, control valves, breakers, switches, and motors. The controlled variable is transmitted to the controller from the sensors.

Human-machine interface – operators and engineers do the configuration of setpoints control algorithms and establish parameters in the controller. The HMI displays the process status information

These devices are used to prevent failure, and to identify and recover from failure

What are the control components in an ICS

SCADA server or master control unit – SCADA server acts as the master In the SCADA system, remote terminal units and PLC devises which are located at remote field sites act as slaves.

Remote terminal unit – these are designed to support SCADA remote stations, it is a special-purpose data acquisition and control unit. RTU’s are used to support remote situations where wire-based communications are unavailable

Programmable logic controller – PLC is a small industrial computer that is designed to perform the logic functions executed by electrical hardware. PLC has the ability to control complex process and they are used in SCADA systems and DCS. PLC’s can be used as a field device because they are more economical and flexible.

Intelligent electronic device – IED is a smart sensor that has the intelligence to acquire data, communicate to other devices, and it performs local processing and control. Automatic control is possible with the help of IED

Human-machine interface – it can be considered as the combination of the software and hardware which allows operators to check the state of a process if it is under control or not. HMI can be used to modify control settings to change the control objective and it can be used to manually override automatic control operations in case of emergencies. Operators can configure set points or control algorithms with the help of HMI. It can display process, status information, historical information and other information to operators.

Data historian – it is a centralized database for logging all process information within an ICS information that is stored in a database that can be accessed to support various analyses.

Communications gateways – two dissimilar devices can be communicated by this, it transforms data from a sending system to match the protocol and transmission medium of a destination host

Field devices – field devices are sensors transducers and actuators and machinery which directly interface with a controller through a digital or analog input/output module.

What are the network components in an industrial control system

Fieldbus network – this device can link sensors and other devices to a PLC or other controller. With the help of this, the need for point to point wiring between the controller and the device is eliminated.

Communication routers – it is a device that can transfer messages between two networks. LAN and WAN are examples of routers, it can be used as a long-distance network medium

Firewall – devices on a network are protected by a firewall, it can protect the network by monitoring and controlling communication packets

Remote access points – they are distinct devices, we can control the control system remotely by the help of this

MODEMS – modems are used for long-distance serial communications, digital data can be converted by modem and it can transmit data over a telephone line to allow devices to communicate. Remote communication is possible through the help of MODEMS.

What are the types of ICS

This system does the automation function in a manufacturing unit, process control systems are mostly seen in factories.

These systems are used in the automation process it will check the process and it prevents unsafe operation processes. They have sensors which will send signals to the controller which can prevent any fault operation

DCS can handle multiple automation processes in a factory, it can control all the automation or it can monitor or supervise the factory process.

Building automation system controls and monitor the whole building process such as air-conditioning, ventilation, energy management, and fire protection. So we can control the whole building from a control room with the help of BAS.

SCADA is a type of industrial control system which can observe the automation process across geographical areas which will be miles away. SCADA system can control and monitor remote field controllers, and the result will be given to operators by a human-machine interface. SCADA system can control one or more distributed or process control systems at distant locations

Why do we have AC power line transmission, why can’t DC power?

PLC learning series 11 : How to interface PLC with SCADA?

What is Reliability Centered Maintenance (RCM)?