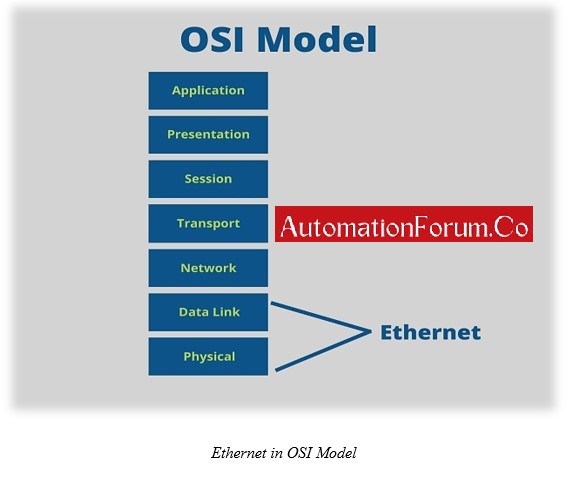 1. What is Ethernet Protocol?

Ethernet/IP is basically an application layer protocol and is a flexible best-in-class Ethernet network. It is a simple way of arranging data inside a TCP/IP packet.

On Ethernet/IP network, data is known as attributes and is represented by values. They are grouped altogether to create objects.

To know about the working of Ethernet/IP protocol, we have to discuss first about the Open Systems Interconnection Reference Model (OSI Model) where different layers of communication network are specified.

It is to note that Ethernet is functional at the data link layer and physical layer stage. It is actually the physical connection which transfers data from node-to-node.

To segment this further, data travels through our PC via a series of networks known as packets and to send and receive the packets, some rules should be set. Here the protocol comes into play. For different devices, protocols set the rules for sending and receiving data packets.

In case of Ethernet, there are three different layer protocols which are:

In Ethernet, Ethernet/IP will progress through CIP layers to the TCP/IP and User Datagram Protocol (UDP) layers, and finally to the IP layer.

3. What are the topologies of Ethernet/IP?

Ethernet/IP is an active technology solution with the network segments conducting point-to-point connections in a star topology. This topology links layer-2 and layer-3 switches.

Ethernet/IP also supports linear topology which allows the networked devices directly chain together with no requirement of wiring back to a central Ethernet switch.

Ethernet/IP also provides a single fault-tolerant ring topology where no operation is interrupted if any link is broken within the ring. Two types of ring topologies are there. One is optimized for devices (device-level ring) and the other one is for switches.

4. Advantages of having Ethernet/IP based communication:

5. Comparison between TCP/IP and UDP:

6. Comparison between TCP/IP and IP:

What is Governor and how is it used to control turbine speed?

What is Interposing Relay? & How it is used in PLC?