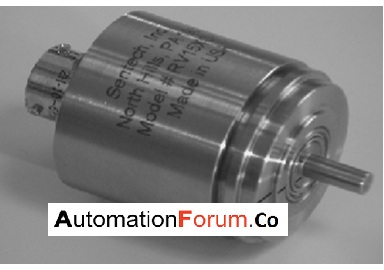 An RVDT can be used to measure the angular displacement, RVDT stands for the rotary variable differential transformer. This device can be considered as an electromechanical transducer which can provide a variable alternating current output voltage. The RVDT has a stator and a rotor, the rotation angle will be proportional to the output voltage. We could determine the direction of the rotation by the phase of the output voltage with respect to the phase of the primary voltage. This is a transformer that can sense the angular displacement of the conductor.

How does an RVDT work

The RVDT operation takes place by rotating the iron core and this iron core is in a stator assembly. The stator is comprised of a primary excitation coil and also has two secondary output coils. So alternating current can be applied to the primary of the stator coil and the primary coil is electromagnetically coupled to the secondary coils. The coupling will be similar to that of the angle of the input shaft, the output pair is placed in a way that one of the coils will be in phase with the excitation coil and the other one will 180 degrees out of phase with it. If the rotor is in a position that directs the available flex equally in both the phase coils then the output voltage will be zero and this is known as zero position.

The RVDT consists of a wound laminated stator and a two-pole rotor. The stator that has four slots has the primary winding and also the two secondary windings, in certain cases, some secondary windings could be connected together. The iron core bearing will be supported within a housed stator assembly, the housing is made up of stainless steel.

What is the difference between RVDT and LVDT

The RVDT construction is similar to the LVDT but when the core rotates the mutual inductance between the primary and each of the secondary coils will change linearly with the angular displacement. In an LVDT we can see a cylindrical iron core whereas in RVDT a rotary ferromagnetic core is used.

What are the advantages of RVDT

What are the disadvantages of RVDT

What are the applications of RVDT