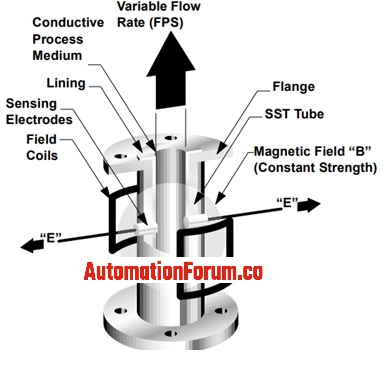 What is the source of error in flow measurement?

What are the types of velocity flow meters?

In this type of flow meter, a multiple-bladed rotor would be mounted with a pipe and it would be perpendicular to the liquid flow. The rotor of this meter would rotate when the liquid pass through it and this rotation can be used to determine the flow rate. The turbine flow meter is very economical, these meters have the disadvantage that it would clog in dirty water and it won’t work properly at low flow rates. A magnetic pick-up will be mounted on the turbine wheel and there will be a sensor to record the voltage pulses, this voltage pulse would be converted into a flow meter reading. We can use a turbine flow meter to do the measurement of natural gas and also the liquid flow

So in this measurement process, the liquid is the conductor and the energized coils which are outside the flow tube will create a magnetic field. We can determine the flow rate by calculating the produced amount of voltage. A pair of electrodes that are placed in the pipe wall would detect the voltage and the voltage is measured by a secondary element.

These flowmeters are mostly used to measure the process water flow and they can be used with most of the liquids and slurries the fluid which is to be measured should be conductive and that’s the major requirement. These flow meters are directly mounted to the pipe, the pressure drop across the meter will be the same as it is through the equivalent length of the pipe because of the fact that there is no flow obstruction and also there are no moving parts.

When a fluid moves by passing an object swirls will be formed an example for this will be river water passing the rock swirls are vortices. So in this type of flow measurement, a natural phenomenon is used. A blunt, non-stream line body will be placed in the stream of the flow in a pipe. So when the flow would pass this body then vortices will be created and fluid swirls will be formed when it flows downstream. So the vortices will be formed according to the flow velocity, which means that the flow velocity is directly proportional to the number of vortices which is formed. Due to the formation of the vortices pressure differential is created and this will be sensed and transmitted as voltage signals. The frequency of the voltage pulse will be proportional to the frequency of the vortices.

This type of flow meter would use ultrasonic waves to measure the flow velocity. The operating principle of this type of flow-meter is by considering the variation between the transmitted and the received sound waves and this measurement will be done as a result of the flow. The ultrasonic flow-meter would transmit sound waves through a stream by using a transducer and the returning sound wave would have the information about the flow rate of the steam. There are clamp-on ultrasonic flowmeters that can be placed outside the pipe and it would send signals through the pipe walls, so because of this feature, it can be used to measure the flow of large pipes.

This type of ultrasonic flow-meter can be used with slurries and gases, it requires sound-reflecting particles for the measurement and because of this, it can’t be used with clear liquids. The flow measurement is based on the fact that the sound wave would vary its frequency if they are reflected by moving particles or gases

What is a positive displacement flow meter and what are its types?