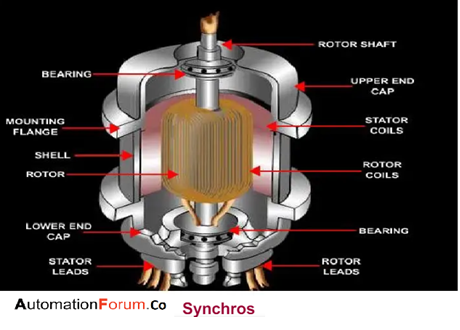 Synchros are electromagnetic devices that are used to transmit positional data electrically from one location to another. It can also be used to compute the sum of two rotations, or the difference in angle between them and they are also used in applications that require low output torques. It can also be called as an electromagnetic transducer which can convert the angular position of the shaft into an electrical signal. Mostly AC transmission system is known as synchros because of their synchronous action in reproducing the angular movement of a shaft.

Synchro is a form of a rotating transformer that resembles a small AC motor and they are widely used as an element of measuring and control systems involving rotatable shafts. The primary coil is wound on the rotor and couples magnetically to the secondary coils on the stator and the connections to the external terminals are through slip rings. Synchros mostly have three secondary windings arranged 120 degrees apart to give the varying voltage ratios as the primary winding is rotated. The rotor energizing voltage is an AC reference voltage at 50 Hz and this induces a voltage across each stator winding which is dependent on the instantaneous angle between the rotor and stator coil axes. So the voltage across any pair of stator terminals is, therefore, the sum or difference, depending on the phase of the individual stator winding voltages. It can also be called as an electromechanical transducer. The magnitude of the magnetic coupling varies between the primary and secondary according to the position of the rotating element. This, in turn, varies the magnitude of the output voltage

How synchro is used in servo system

The control synchro system is the most common of all synchros and is extensively used in aircraft and navigation systems. Control synchros are similar to the torque synchros but the signal from the receiver is going to be amplified to drive output and the impedance of the windings is much higher so there is no danger of the system burning out. The control transformer can act as a null detector and can be used in servo systems. Control synchros can be used in electromechanical servo and shaft positioning.

Synchro’s can be classified into two overlapping groups they are torque synchros and control synchros.

The rotor of the receiver moves to a position-dependent on the electrical angular information received from its connected torque transmitter or torque differential transmitter. They are mostly used as a receiving element in a remote position indicating system.

Control differential transmitter receives electrical information from a control transmitter and has a rotor that can be mechanically moved and it will be helpful to transmit an electrical signal which is proportional to the sum or difference in angle between the electrical input and its own rotor position.

A resolver is a variant of synchro and it has two stator windings displaced by 90 degrees, it can be used in a similar way as synchros to transmit data in a control chain using a resolver transmitter at one end and resolver control transformer at the other. Resolvers are used in robot control and radar system.

What is the use of synchro

What is IoT penetration test? Pentest, testing an IoT.

Why do we have AC power line transmission, why can’t DC power?

What are the types of single-phase induction motors?