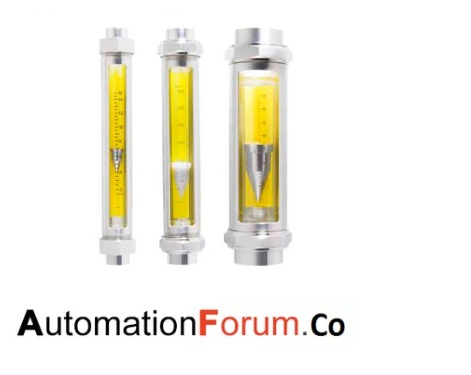 A rotameter measures the flow of liquids, gases and steam by using a float inside a conical tube. The rotameter principle is one of the oldest and most mature principles in flow measurement. The space between the tube and the float is larger at the top to allow more flow through the meter. As gravity works in a vertical orientation, the tube must be oriented vertically.

How flow is measured using rotameter?

The rotameter is a type of variable area flowmeter that consists of a tapered measuring tube and a float, which can be freely moved up and down inside the tube. The measuring tube is mounted vertically, with the small end at the bottom.

The fluid to be measured enters the bottom of the tube, passes upwards around the float and exits at the top. The figure shows a typical rotameter

When the float moves up towards the larger end of the conical tube, the annular opening between the tube and the float increases.As the area increases, the pressure difference across the float decreases. The float will assume a dynamic equilibrium position when the pressure differential across the float plus the float effect balances the weight of the float. Each flotation position corresponds to a particular flow and not to another for a fluid of a certain density and viscosity. You take the flow reading from a calibrated scale in the tube The position of the float in the measuring tube varies in a linear relationship with the flow rate.

Note: Rotameters can directly measure flows of up to 4,000 gal / min. Higher flow rates can be managed economically by using the bypass type rotameter.