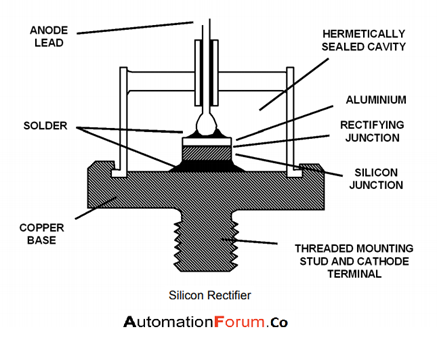 Rectifier diodes are usually used in applications which require high currents such as power supplies, the range in which the diode can handle current will vary from one ampere to hundreds of amperes. Average current-carrying range of this rectifier diode is one ampere and they have a peak inverse voltage between 50 – 1000 volts, larger rectifier diodes can carry current up to 300 amperes. It can be considered as the electrical equivalent to one way valve, it will allow the current to flow in one direction and not in another direction basically it is a semiconductor device. When the diode is conducting it is said to be forward-biased. The diode will offer very little resistance to the current flow under these conditions. When opposing current flow the diode is said to be reverse-biased, under reverse bias condition the diode has a high resistance

What are the types of rectifier diodes

The aluminum base serves as a surface for the dissipation of the heat. The rectifying junction covers one side of the base apart from a narrow strip at the edges and an area around the fixing hole, which is sprayed with insulating varnish

Silicon rectifiers can be considered as an ordinary rectifier with a control element the current to the control element which is termed the gate determines the anode to cathode voltage at which the device commences to conduct. The gate bias may keep the device off or it may permit conduction to commence at any desired point in the forward half cycle of a sinusoidal input, silicon rectifiers are used as an ac power control device. They are used in a brushless ac generator, the silicon slice is extremely small. On one face it has a fused aluminum alloy contact to which the anode and lead are soldered. The other face is soldered to a base usually copper. This is the cathode and acts as a heat sink.

The aluminum-silicon junction forms the barrier layer these rectifiers operate at a temperature up to 150 degrees. The ability of the SCR to remain on when the triggering current is removed is called as latching. The two major important qualities while selecting a silicon rectifier is the voltage and current for a particular application that the device can survive without breaking down.

what is wind energy and how does it work