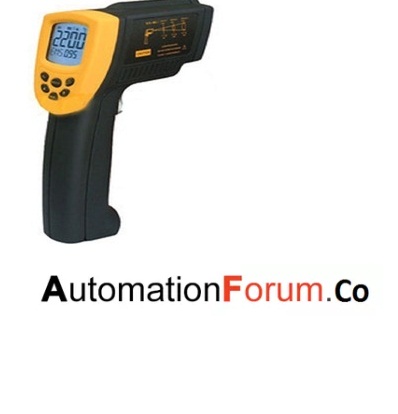 An optical system collects the visible and infrared energy of an object and focuses it on a detector, as shown in the Figure. The detector converts the collected energy into an electrical signal to control a temperature display or a control unit. The detector receives the photon energy of the optical system and converts it into an electrical signal. Two types of detectors are used: thermal (thermopile) and photon (photomultiplier tubes). Photon detectors are much faster than the thermopile type. This allows you to use the type of photon to measure the temperature of small objects that move at high speed.

Radiation pyrometers are used to measure the temperature of very hot objects without being in contact with them. Molten glass and molten metals during casting and shaping operations are typical of the objects they measure. When selecting the correct radiation pyrometer for an application, you must take into account several factors. In narrow or broad fields of vision, the cross-sectional area can vary widely. It can be rectangular, circular and slot-shaped, depending on the type of openings used in the instrument. In some instruments, a telescopic eye magnifies radiant energy to measure smaller objects at longer distances. On some instruments, hot objects up to 1/16 inch in diameter can be measured. The construction of the instrument components, such as the lens and the curved mirrors, control the route of the view. The construction materials determine the optical characteristics of the device. For example, glass does not transmit light much beyond 2.5 microns. Therefore, it is only suitable for high temperature applications where high energy outputs are present. Other common optical materials are quartz (which transmits well at 4 microns) and crystalline calcium fluoride (which transmits approximately up to 10 microns).

Band pass filters are used in some instruments to cut off unwanted light at certain wavelengths.