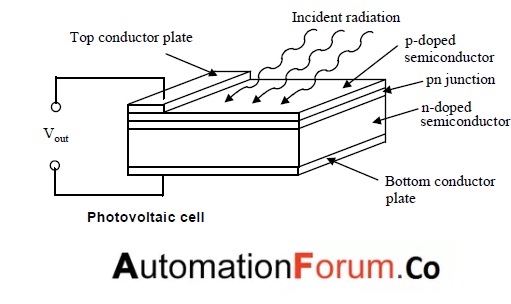 An important type of photodetector is the photovoltaic cell, which generates a voltage that is proportional to the incident EM radiation intensity. These sensors are called photovoltaic cells because of their voltage-generating capacity, but the cells actually convert EM energy into electrical energy. Photovoltaic cells are very important in instrumentation and control applications because they are used both as light detectors and in power sources that convert solar radiation into electrical power for remote-measuring systems. Our emphasis here is on their use in analytical instruments.

The operating principle of the photovoltaic cell is illustrated in Figure above. The cell is a large exposed diode that is constructed using a pn junction between appropriately doped semiconductors. Photons hitting the cell pass through the thin p-doped upper and are absorbed by electrons in the n-doped layer. This causes conduction electrons and holes to be created

The upper terminal is positive and the lower negative. In general, the open-circuit voltage V that is developed on a photovoltaic cell varies logarithmically with the incident radiation intensity according to the following equation:

What is intrinsically safe system and what is its importance?