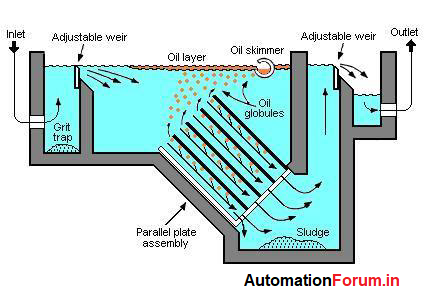 The first form of a coalescer plate is a parallel plate interceptor (PPI). The first time this was installed in an API separator. This is shown in Figure 5. A “V” shaped plate where the flow will penetrate then the oil moves upward from the bottom of the coalescing plate and moves to the sides. Sediment moves towards the middle then down from the bottom of the separator, and they will be moved later.

The most common form of parallel plate interceptor used in petroleum facilities is the corrugated plate interceptor (CPI). This is an improvement in the shape/model of the PPI which requires a small area to move the same particle size and has the added advantage of making the following sediment easier to handle.

The figure shows the design form of the CPI while. The plate pack has a 45 ° angle and for the water flow pattern that moves down the plate. The oil attached to the plate will move and rise to the surface and gather at the oil collection site. Therefore, there is a possibility that the grains of sand are attached and will eventually clog the plate, resulting in turbulence flow and eventually can clog the flow. To eliminate the above problems, an “upflow” flow pattern made from the bottom up must be done. CPI units used are designed at 60°.

What is UART? Basics of UART