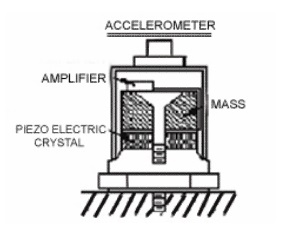 Accelerometers are a piezo-electronic (crystal) device. A pre- loaded crystal is charged with current and as the crystal is compressed or de-compressed by vibration an output proportional to g’s (gravity) is provided.

A “g” is equal to 9.80 meters/second2 or one (1) standard earth gravity.
Accelerometers are normally used for high-frequency bearing cap vibration readings (Case/Bearing Cap Absolute on machines using rolling element bearings. Usually the output is integrated electronically to velocity
(in/sec or mm/sec). Other applications include monitoring Gears and High Frequency Applications.

The most obvious starting point in the system is the accelerometer itself. It is simply a transducer that converts an applied acceleration to its body into a proportionate displacement of voltage on its output.

The signal conditioning circuitry for measuring vibration is fairly straightforward. It consists of the accelerometer itself, a current source to excite the accelerometer, proper grounding to eliminate noise pick-up, AC coupling to remove DC offsets in the system, an instrumentation amplifier to boost the accelerometer’s signal level, a low pass filter to reduce noise and prevent aliasing in the data acquisition system, and finally, simultaneous sample and hold circuitry to keep the signals properly timed with respect to each other.

The power source to excite the accelerometer is a current source. Most accelerometers can operate on a current between 2 and 20 mA. While it may seem more economical to use a 2 mA source, it should be noted that the maximum frequency and amplitude that an accelerometer can drive is directly related to the current that is exciting it. Thus, long cable lengths need higher currents in order to drive high frequencies at large voltage ranges. Systems with short cables or low frequency measurements can tolerate being driven with lower currents.
In addition to the amount of current the source can supply, it must have a high enough voltage compliancy to power the sensor over its entire operating range. Voltage compliancy is a measure of the voltage range that a current source properly functions. For example, a 24 V compliant current source delivers a constant current over a range of 0 to 24 V across its terminals.
Most accelerometer systems use one of three types of current sources, resistor and a battery, diode and a battery, and active. These will be discussed in detail.
The simplest current source used for exciting accelerometers is a battery and resistor system – three 9 V batteries in series with a resistor.
While it is very simple and inexpensive, it is also very inadequate. The resistor maintains a constant current flow as long as there is no signal in the system. The moment a signal changes the voltage level at the output terminals, the current also changes in accordance with Ohm’s law. To put it bluntly, the battery and resistor current source is 0 V compliant by its very design! This dynamic changing of current betrays itself as non-linearity in the system’s response. As a result, this current source produces a lot of harmonic distortion.
Active Current Source:-

The necessarily low value of the resistor to supply the necessary current means that the dynamic impedance of this current source is also quite low, usually around 5 kilo-Ohms. (An ideal current source has an infinite dynamic impedance.)
Finally, the nominal current and peak output from this current source slowly changes over time as the batteries discharge.
The active current source is the best source to use for energizing accelerometers. Its compliancy can be very high, and does not degrade with either time or frequency. There are no batteries to replace, thus eliminating the need to service it. Depending on the complexity of the design, it can have a dynamic impedance on the order of a half a meg-Ohm and up.
The only drawback is that it is more expensive than the other current sources because of its greater complexity.
Sensor Grounding :
Proper grounding is essential to minimizing noise in the vibration measuring system. Improper grounding, however, can cause more noise problems than it can eliminate. There are two main causes of noise as a result of grounding, ground loops or floating nodes.
A ground loop occurs when both the sensor and the signal conditioning input are grounded. The loop forms between the sensor cable and the building ground. This huge loop is perfect for picking up any induced currents produced by machinery, lights, and more. Because the loop resistance is finite, the result is a large 50 or 60 Hz common mode noise signal on the signal conditioning’s input. Thus, a large common mode noise is picked up in the system. If the situation is bad enough, the common mode voltage can get high enough to saturate the signal conditioning’s front end, causing a multitude of noise problems.
Likewise, floating nodes which occur when neither the sensor nor the signal conditioning system are grounded, induced charges can build up on the sensor to the point of overloading the front end of the signal conditioning system.
The solution is simple. Either ground the sensor or the signal conditioning input, but not both.
The AC Coupling :

The next stage, AC coupling, removes the DC voltage offset that is present on the accelerometer. This dramatically increases the resolution of the system, because the system no longer has to accommodate the offset. For example, an accelerometer with an output voltage swing of +2 V and an offset voltage of    10 V would require a digitizer with a 12 V input range, despite only using 4 V for the actual signal. The same sensor AC coupled would require a 4 V input range on the digitizer, increasing the resolution by a factor of three.
In addition, the AC coupling removes the long term DC drift that accelerometers have due to age and temperature effects.
The only care one needs to have with AC coupling is to make sure that the low frequency roll-off is lower than the range of frequencies desired.
Basics of Vibration Measurement
Different Types of Vibration Measuring Instruments
previous post