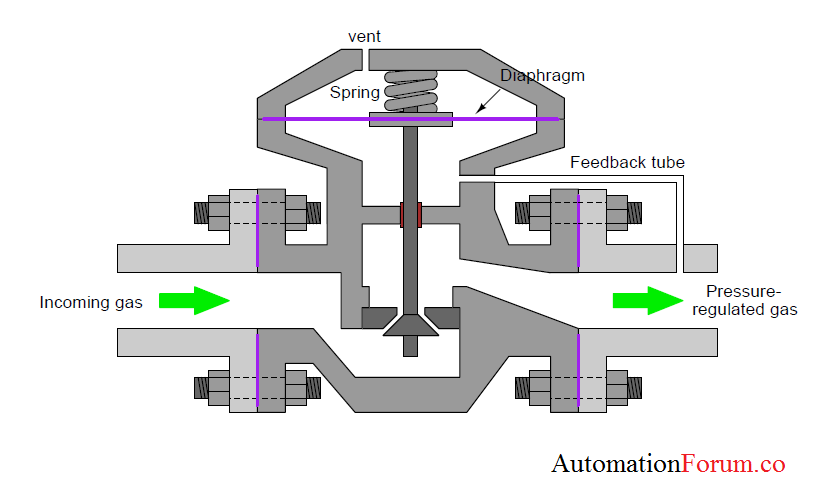 The final control elements perform their functions according to the commands of this control room. A self-regulated valve adjust the flow using the fluid flow pressure in the pipe. Then, the self-regulated valve receives its energy directly from the controlled system, so the amount of control is limited. However, the structure is simple and economical, and when used properly, the results are very good.

These are generally called pressure-reducing valves and are normally used to maintain stable secondary pressure without affecting the primary pressure.

There are two different types of pressure regulators direct-action types and pilot types.

In the direct type of action, a diaphragm is between a spring and the opposite secondary pressure. Because the valve opens and closes according to differential pressure, these valves are used with liquids or small-bore applications.

The valve is designed for point of use installations. At start-up, the upstream pressure, aided by a return spring, keeps the valve head against the seat in the closed position. The downstream pressure is established by turning a handwheel in a clockwise direction that compresses the control spring and extends the bellows.

In the pilot type valve, the pilot valve, which is actuated by a diaphragm, adjusts the primary pressure applied to a piston.

This type of valve works by balancing the downstream pressure against a control spring. This modulates a small valve plug on a seat (the pilot). The flow through this seat is in turn directed to the diaphragm of the main valve (phosphor bronze or stainless steel), where it modulates the main valve.

Under conditions of stable load, the pressure below the pilot diaphragm balances the force set in the adjusting spring. This establishes the pilot valve, allowing a constant flow through the main diaphragm. This ensures that the main valve is also set to provide stable downstream pressure.

Any variation in the load or pressure will be detected immediately in the pilot diaphragm that will act to adjust the position of the main valve. ensuring a constant downstream pressure. To achieve the most stable operating conditions, an external pressure detection pipe is used.

PLC program for a batch process

What is valve packing?