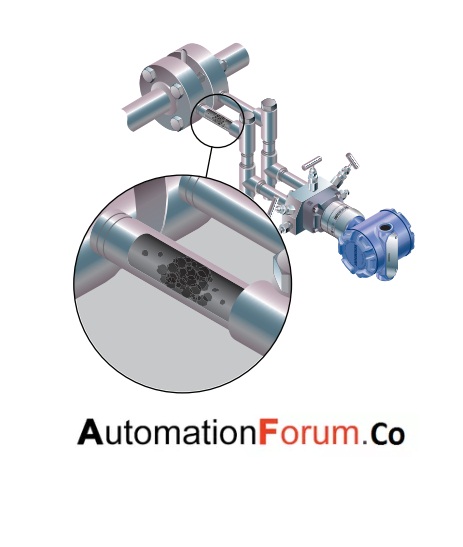 Pressure transmitters are used in pressure, level, and flow measurement applications. Regardless of application, the transmitter is rarely connected directly to the pipe or vessel. Small diameter tubes or pipes commonly called impulse lines are used to transmit the pressure signal from the process to the transmitter. In some applications, these impulse lines can become plugged with solids or frozen fluid in cold environments, effectively blocking the pressure signals. One survey in Europe estimated that 60 percent of heat trace systems are not working properly. The user typically does not know that the blockage has occurred. Because the pressure at the time of the plug is trapped, the transmitter may continue to provide the same signal as before the plug. Only after the actual process changes and the pressure transmitter’s output remains the same may someone recognize that plugging has occurred. This is a typical problem for pressure measurement, and users recognize the need for a plugged impulse line diagnostic for this condition.

Emerson™ has developed a unique patented technology that provides a means for early detection of abnormal situations in a process environment, including plugged impulse lines. The technology is based on the premise that virtually all dynamic processes have a unique noise or variation signature when operating normally, and that changes in these signatures may signal that a significant change in the process, process equipment, or transmitter installation will occur or has occurred. For example, the noise source may be equipment in the process such as pumps or agitators, or the natural variation in the DP value caused by turbulent flow, or a combination of both.

The sensing of the unique signature begins with the combination of a high speed sensing device
such as the Rosemount™ 3051S Pressure Transmitter, with patented software resident in a HART® Advanced Diagnostics or FOUNDATION™ Fieldbus Feature Board to compute statistical parameters that characterize and quantify the noise or variation. These statistical parameters are the mean, standard deviation, and coefficient of variation (ratio of standard deviation to mean) of the input pressure. Filtering capability is provided to separate slow changes in the process due to setpoint changes from the process noise or variation of interest. The transmitter can make the statistical parameters available to the host system via HART or Fieldbus communications as non-primary variables. The transmitter also has internal software that can be used to baseline the process noise or signature via a learning process. Once the learning process is completed, the device itself can detect significant changes in the noise or variation, and communicate an alarm via the 4 – 20 mA output or alert via HART or FOUNDATION Fieldbus.

The pressure process variable is input to a Statistical Calculations Module. There, basic high pass filtering is performed on the pressure signal. The coefficient of variation is calculated from the ratio of standard deviation to mean. The mean (or average) is calculated on the unfiltered pressure signal, and the standard deviation is calculated from the filtered pressure signal. These statistical values are available to the user via HART or FOUNDATION Fieldbus on handheld communication devices like the Trex™ or asset management software such as Emerson’s AMS Device Manager.
The Plugged Impulse Line diagnostic also contains a learning module that establishes the baseline values for the process. Baseline values are established under user control at conditions considered normal for the process and installation. These baseline values are made available to a decision module that compares the baseline values to the most current values of the mean and standard deviation. Based on sensitivity values and the actions selected by the user, the Plugged Impulse Line diagnostic generates alarms or alerts when a significant change is detected in either value.

What is a PID control action?