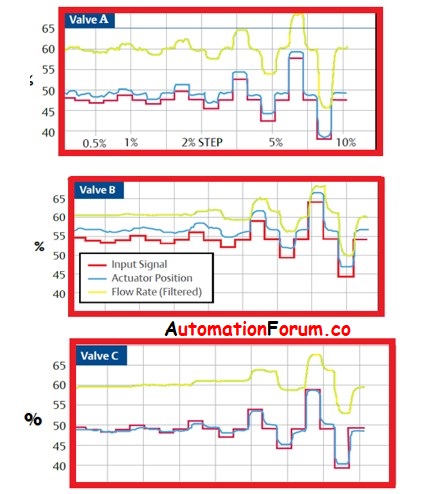 Finally, the ball or disc releases or fleas and shifts to a new position.

How does the dead band in the control valve occur?

Some common symptoms of the increase in the dead band include:

How do you determine the dead band control valve?

The procedure to determine the dead band and the bench set range of the control valve is shown below:

What are the causes of the dead band?

What are the effects of the dead band?

The above three graphs represent an open-loop test for three different control valves. Under normal operating conditions. These valves A, B, and C are subjected to a series of step inputs which range from 0.5% to 10%.

Open-loop tests under flowing conditions are most important because they allow the performance of the entire valve assembly to be evaluated, rather than just the valve actuator assembly as would be the case under most bench test conditions.

What is HART and HART Multiplexer?