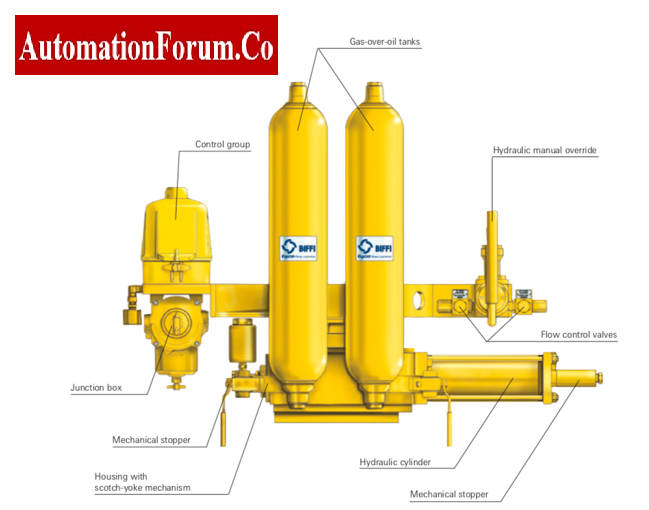 What is meant by Actuator?

What are the three types of Actuator?

The three types of actuators are

What is a Hydraulic Actuator?

A hydraulic actuator is a device that converts hydraulic energy into mechanical movement.

What is meant by Fluid Power in Actuator?

The hydraulic actuator operates based on Pascal’s Law, which states that any force applied to a contained fluid is transferred evenly in all directions throughout the fluid, regardless of the container’s shape.

P is the Pressure applied (N/m2)

Typically, hydraulic actuators or cylinders consist of a hollow cylinder with piston, piston rod, and piston barrel. The cylinder bottom (also known as the cap end) and the cylinder head, where the piston rod exits the cylinder, seal off the barrel on either end. Seals and sliding rings are on the piston. The piston performs linear work and motion when the hydraulic pressure is applied

Two chambers are made inside the cylinder by the piston. They are

Cylinder base or cap

The barrel and the bottom part of most hydraulic cylinders are soldered together. If done incorrectly, this could harm the barrel’s interior.

As a result, some cylinder designs incorporate a connection between the cylinder end cap and the barrel that is threaded or flanged. This sort of barrel allows for easy disassembly and maintenance.

In some cases, for simple cylinders a simple lock is used to connect the barrel and cylinder head. However, the connection is typically screwed or flanged. The best connections are flange connections, but they are expensive. Before machining, a flange needs to be weld to the pipe. The connection is fastened and always easy to remove, which is a benefit.

The piston is a small, cylindrical piece of metal that internally divides the cylinder barrel’s two halves. Usually, the piston has grooves carved into it for metal seals. These seals are frequently made of cast iron rings, U-cups, or O-rings. They stop the hydraulic oil from going by the piston and into the chamber on the other side while under pressure. The piston’s two sides have different pressures, which causes the cylinder to extend and retract. The design and material of piston seals varies depending on the pressure and temperature requirements that the cylinder will experience during operation.

The piston rod connects to the piston and extends from the cylinder through the rod-end head. It is normally a piece of cold-rolled steel that has been hard chrome-plated. In double rod-end cylinders, the actuator has a rod coming out of both the piston’s sides and the barrel’s ends.

The hydraulic actuator is connected to the working part of the machine by a piston rod. This connection can take the shape of a mounting accessory like a rod-clevis or rod-eye or a machine thread. These mounting attachments may be threaded, welded, or in some instances, machined into the rod-end itself to the piston rod.

To stop pressurized oil from seeping past the point where the rod and the head meet, the cylinder head is equipped with seals. The rod gland is the name of this region. When the extended rod retracts back into the cylinder, a rod wiper, a different seal that is frequently present, prevents impurities from entering the cylinder.

Additionally, the rod gland features a rod wear ring. The piston rod is supported by the worn ring’s function as a linear bearing to guide it as it travels back and forth through the rod gland. There are instances where the rod gland and the rod wear ring are constructed from a single integral machined element, particularly in small hydraulic cylinders.

The hydraulic actuator is classified into linear actuator & rotary actuator.

The linear actuator consists of hydraulic cylinder which gives motion that is straight. The length of the stroke affects linear displacement. This type is commonly referred to as cylinders, jacks, or rams.

The rotary actuator consists of hydraulic motor which generates constant rotational motion. The flow is created by rotating the pump shaft. By forcing fluid into chambers, the motor shaft rotates.

Different Kinds of Hydraulic Actuator based on Non Rotating Movement

A predetermined amount of straight line motion is offered by cylinder actuators. They mainly include the movement of a tightly fitted piston inside of a closed cylinder. To produce the mechanical output, the piston is connected to a rod that stretches from one end of the cylinder. The hydraulic cylinder is further classified into Single Acting Cylinder & Double Acting Cylinder.

In below figure, each end of the cylinder includes a port for admitting or removing hydraulic fluid. Depending on the desired direction of the power stroke, a four-way directional valve connects one cylinder port to the hydraulic supply and the other to the return.

The extending directions can produce force in a single acting cylinder. This consists of a piston inside of a barrel of a cylinder. The piston has a port for the coil’s entrance and exit on one end that can reciprocate and another port on the other end. The piston is not returned hydraulically. Either gravity or a spring retracts the lever.

Because a single functioning hydraulic cylinder is easier to maintain, it requires less work. When there is only one line, the pressure on that one line alone determines how the cylinder will function. They frequently use a spring or a similar device to extend or retract the piston rod, however they may also rely on the force of the end to do so. When designing durable, dependable equipment, simplicity is always a smart idea.

A double-acting hydraulic cylinder will have two ports, the cap end port and the rod end port, as indicated in the figure. As its name suggests, a double action hydraulic cylinder can be moved hydraulically in both directions, i.e. forward and backward.

A cylindrical housing houses one piston. The hydraulic pressure force that is delivered on the piston or plunger when hydraulic oil is fed to the cap end port of the cylinder causes the piston to extend, and this cylinder stroke is known as the forward stroke. Hydraulic oil will be forced out and directed into the reservoir during the extension of the cylinder piston or plunger.

A double acting cylinder produces extend and retract forces to move the piston rod and alternates cycles of pressurized fluid to both sides of the piston, giving the movement more control.

Single acting cylinders are the most affordable and straightforward design. Through a port at one end of the cylinder, hydraulic fluid enters, moving the piston to lengthen the rod. When an outside force acts, the piston returns to its initial position and the hydraulic fluid is forced back through the supply tube and into the fluid reservoir.

Hydraulic fluid is fed into ports at each end of double acting cylinders so that the piston can be extended and contracted. They are utilized when there is no external power available to retract the piston or when high force in both directions of motion is needed. Only pushing and pulling should be done using a hydraulic cylinder.

To get the two pistons to retract or extend simultaneously so that the racks may rotate the pinion gear, hydraulic fluid is either fed to the two end chambers or the middle chamber.

An easy modification of the primary device is a plunger actuator. It can only be utilised as a pushing mechanism because it is a hydraulic cylinder without a piston. Such a device is typically utilised in crushing equipment at rubbish dumps, as well as equipment that is used to smash huge metallic objects, old cars, and other garbage. In comparison to a straightforward hydraulic actuator, a plunger actuator offers a significantly higher pushing force.

When pulling an object, functions similar to the original hydraulic cylinder. There is, however, a minute difference. This device operates significantly more quickly when pressing down on an object since it has greater strength and is analogous to the plunger hydraulic actuator.

Oil is typically pulled onto the pistons and pulled by the standard hydraulic pump. The piston is used to move an object when the oil is poured out.

Schematic of hydraulic actuator used in water treatment industry is shown in above figure. Pressurized gas is used to fuel the gas-over-oil actuator. After being filtered, the gas passes through control valves and into the tank that corresponds to the operation (closing or opening) that needs to be done. While the oil in the other chamber goes into the second tank, the hydraulic oil in the tank is pressured by the gas and flows into the appropriate cylinder chamber. The actuator operates as a result of the cylinder piston stroke.

Two flow control valves are used to modify the oil flow from the cylinder into the tanks. The actuator’s stroking time can be changed in this manner.

By choosing the opening and closing operation using the hand-actuated directional control valve and then activating the hand pump, emergency manual override can be accomplished.

What are Flanged Pipe Fittings?

WHAT IS RATIO CONTROL ?