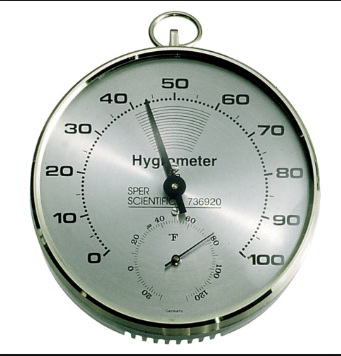 Devices that indirectly measure humidity by sensing changes in physical or electrical properties in materials due to their moisture content are called hygrometers. Materials such as hair, skin, membranes, and thin strips of wood change their length as they absorb water. The change in length is directly related to the humidity. Such devices are used to measure relative humidity from 20 to 90 percent, with accuracies of about ± 5 percent. Their operating temperature range is limited to less than 70°C.

Laminate hygrometer is made by attaching thin strips of wood to thin metal strips forming a laminate. The laminate is formed into a helix as shown in Figure, as the humidity changes the helix flexes due to the change in the length of the wood. One end of the helix is anchored, the other is attached to a pointer (similar to a bimetallic strip used in temperature measurements); the scale is graduated in percent humidity.

Hair hygrometer is the simplest and oldest type of hygrometer. It is made using hair as shown in Figure. Human hair lengthens by 3 percent when the humidity changes from 0 to 100 percent, the change in length can be used to control a pointer for visual readings or a transducer such as a linear variable differential transformers (LVDT) for an electrical output. The hair hygrometer has an accuracy of about ±5 percent for the humidity range 20 to 90 percent over the temperature range 5 to 40°C.

Resistive hygrometer or resistive humidity sensors consist of two electrodes with interdigitated fingers on an insulating substrate as shown in Fig. 9.6a. The electrodes are coated with a hydroscopic material (one that absorbs water such as lithium chloride). The hydroscopic material provides a conductive path between the electrodes; the coefficient of resistance of the path is inversely proportional to humidity. Alternatively, the electrodes can be coated with a bulk polymer film that releases ions in proportion to the relative humidity; temperature correction can again be applied for an accuracy of 2 percent over the operating temperature range 40 to 70°C and relative humidity from 2 to 98 percent. An ac voltage is normally used with this type of device, i.e., at 1 kHz a relative humidity change from 2 to 98 percent will typically give a resistance change from 10 MÙ to 1 kÙ. Variations of this device are the electrolytic and the resistance-capacitance hygrometer.

The dielectric constant of certain thin polymer films changes linearly with humidity, so that the capacitance between two plates using the polymer as the dielectric is directly proportional to humidity. The capacitive device has good longevity, a working temperature range of 0 to 100°C, a fast response time, and can be temperature compensated to give an accuracy of  ±0.5 percent over the full humidity range.

Piezoelectric use two piezoelectric crystal oscillators; one is used as a reference and is enclosed in a dry atmosphere, and the other is exposed to the humidity to be measured. Moisture increases the mass of the crystal which decreases its resonant frequency. By comparing the frequencies of the two oscillators, the humidity can be calculated. Moisture content of gases from 1 to 25,000 ppm can be measured.

A simple method of measuring the humidity is to obtain the dew point. This is achieved by cooling the air or gas until water condenses on an object and then measuring the temperature at which condensation takes place. Typically, a mirrored surface, polished stainless steel, or silvered surface is cooled from the back side, by cold water, refrigeration, or Peltier cooling. As the temperature drops, a point is reached where dew from the air or gas starts to form on the mirror surface. The condensation is detected by the reflection of a beam of light by the mirror to a photocell. The intensity of the reflected light reduces as condensation takes place and the temperature of the mirror at that point can be measured.

To know about Pressure Relief valves

Pressure – Reducing valves and its Applications