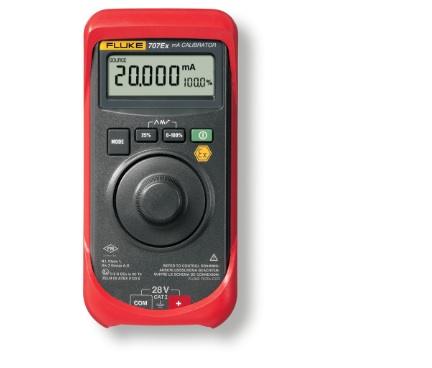 Special-purpose electronic test instruments called loop calibrators are manufactured for the express purpose of 4-20 mA current loop circuit troubleshooting. These versatile instruments are generally capable of not only measuring current, but also sourcing current to unpowered devices in a loop, and also simulating the operation of loop-powered 4-20 mA transmitters.

A very popular loop calibrator unit is the Altek model 334A, a battery-powered, hand-held unit with a rotary knob for current adjustment and toggle switches for mode setting. The following illustration shows how this calibrator would be used to measure current in a functioning input signal loop:

The same loop calibrator may be used to source (or drive) a 4-20 mA signal into an indicating instrument to test the function of that instrument independently. Here, we see the Altek calibrator used as a current source to send a 16.00 mA signal to the PV (process variable) input of the controller:

An alternative method of sourcing a known current signal into an indicating instrument that provides loop power is to set the loop calibrator to a mode where it mimics the electrical behavior of a loop-powered 2-wire transmitter. In this mode, the calibrator serves to regulate loop current at a user-determined value, but it provides no motivating voltage to drive this current. Instead, it passively relies on some external voltage source in the loop circuit to provide the necessary electromotive force:

Note the polarity of the calibrator’s test leads in relation to the controller: the red test lead connects to the positive loop power terminal while the black lead connects to the positive input terminal. Here, the calibrator acts as a load, just as a loop-powered transmitter acts as an electrical load. The only source of electrical power in this test circuit is the 24 VDC source inside the controller: the same one normally providing energy to the circuit when a loop-powered transmitter is connected.

A legacy loop calibrator still familiar to many instrument technicians at the time of this writing is the classic Transmation model 1040:

Other examples of vintage loop calibrator technology include the Nassau model 8060 (left) and the Biddle Versa-Cal (right):

A modern loop calibrator manufactured by Fluke is the model 705:

With this calibrator, the measure, source, and simulate modes are accessed by repeatedly pushing a button, with the current mode displayed on the screen:

A brief note about Pneumatic instrumentation