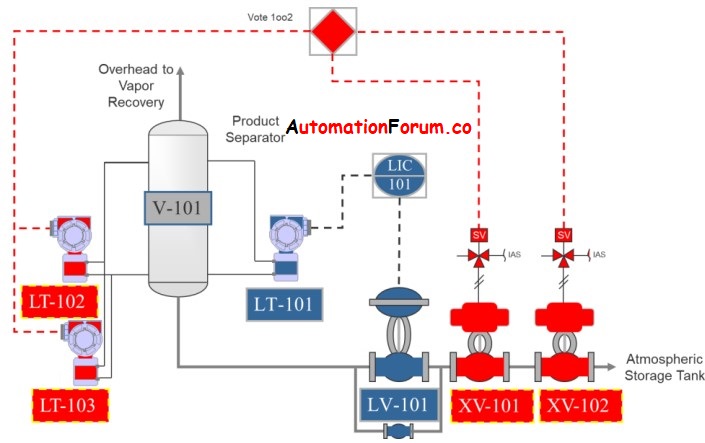 There are different types  of safety integrity level and if this level is high then the safety would be high too. So if we need to attain a higher SIL level then the complexity and cost of the system would increase too.

SIF means safety instrumented function, SIF is designed to reduce the chances of failure in an industrial process. So it would keep the process in a safe manner by reducing the chances of failure. It would also reduce the risk to a tolerable level. SIF can be described as the combination of the Sensors, final control element, and logic solvers. SIL level is a part of SIF the required level of SIL would be depended on the amount of risk which is required to be handled. A safety instrumented system is formed by one or more SIF.

So in this, the sensors would check the data or information to determine if there is an emergency situation. The logic solver would determine the actions that must be carried out based on the received data

Where should we require the safety integrated System?

What are the different types of voting logic used in an industrial system?

This type of voting logic is used to provide a small amount of safety, so it would be used in a system in which there would be less complexity. If you need to get a good amount of diagnostic coverage then this voting configuration can be described as 1oo1D. The D is to denote the automatic failure diagnostic features. The fault tolerance level of this voting system is really low, so if there is any fault then we can’t avoid a shutdown of the process.

This type of voting logic is created as an up-gradation of 1oo1, so in this, there would be an improvement in the safety level. This is a two-channel voting system and if one of them fails then the other one would be there to handle the faulty condition. But in this, the trip rate would be really high and it is a disadvantage of this voting logic.

In this voting logic configuration, the probability of failure is reduced due to the two-channel. This voting logic has a high level of diagnostic features. So the self-testing would be carried out really easily.

Voting at the I/O level to improve the safety and reliability:

Voting logic is a fail-safe design and it would make the process to safe conditions in case of component failure, system, or instrument.

1oo1 – Safety and reliability are low

1oo2 – High on safety and low on reliability

2oo2 – Safety and reliability are high

1oo2D- Safety and reliability are really high than the 2oo3

How to choose the voting logic configuration for the System integrity?

What is controller tuning