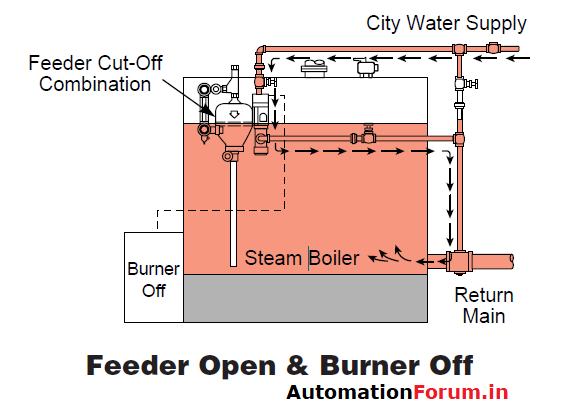 It is harmful to boiler when water level in the boiler goes down below a cutoff, which results in direct fire burn of boiler walls and makes the boiler body week and brittle.

A low water cutoff is the primary protective device to save the boiler in the event the water level goes too low.

The cutoff has to be mounted in a way that holds it in place close to the plant so that the heat development does not change it relative to the smallest secure rate of water.

Any cutoff located significantly lower than the bottom of the gauge glass is a potential problem.

Any steam generator should have two small water cut-offs and should be connected to the boiler for autonomous links. The other cutoff can still operate if one link is plugged

The cutoff must be installed in such a manner that it will drain back into the boiler.

Notice that the figure shows tees and crosses in the piping closed with nipples and caps, that’s so you can gain access to the piping to inspect it and, if necessary, clean it.

If your boiler has low water cutoffs on the boiler’s front and rear, don’t be amazed if it’s not in same level. Since the flame is focused in the front of the boiler, it is not uncommon to see a path in the fluid surface in the tank from front to back.

The amount in the rear of the tank may be greater or smaller than the front depending on the allocation of the flue fuel and pipe structure.

Float actuated cutoffs involve some means of securing the part that links the float pole to the electrical buttons to avoid the portion of the switch containing the electrical connections from spilling steam or water.

The most popular locking technique is to use a bellows that enables the float shaft to convey to the buttons the float movement. The bellows provide a water (and steam) proof seal which is flexible to allow movement.

What is proactive maintenance?

What are the types of valves used in process control?

Selection of a pressure gauge