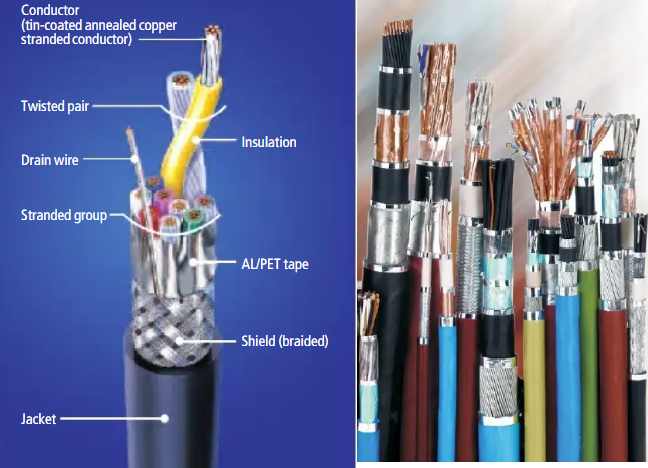 What is an instrument cable and what is its purpose?

How to select an instrument cable?

Mostly, instrument cables are selected according to their source impedance and according to this, we could use this for the required process. Certain instruments have very low source impedance and there are also instruments that have very high source impedance. We must also consider if the cable is used for high-level or low-level signals. High-level signals would be between the range of 6-50v while the low-level signals would be below 5v. Signal wiring must be made up in twisted pairs, mostly solid conductors should be used so that there won’t be any degradation of signal because of broken strands that could occur in stranded conductors.

How to do the instrument cabling?

What are the major parts of an instrument cable?

Mostly these cables consist of a conductor on its center and it would carry the current from the source, separated by insulation from a surrounding shield. The surrounding shield is the current return path that is required for the cable to complete the circuit. All these components would be augmented by an electrostatic shield in order to reduce the handling noise and also there is an outer jacket for protection.

What are the major characteristics required for an instrument cable?

What is the instrument cable schedule?

Details in the instrument cable schedule

What is instrument cable shielding and why is it required?

As we mentioned above the instrument cables are used to transmit the signals to and from the control center and the entire plant. So the complexity of the industrial process is huge and due to this transmission of process signals to long distances is needed. So the major problem which could arise in this situation would be the electrical signal noise. The electrical signal noise can be described as an unnecessary voltage or current which would be created in the signal leads, or by an external source mostly it could be from the adjacent wiring or from the equipment.

Instrument cable shielding can prevent this signal noise, shielding is the use of conducting or ferromagnetic barrier between the noise source and the instrument cable. A type of electromagnetic shielding material would be wrapped around the cable underneath the outer jacket.

What is the purpose of instrument cable shielding and how can it prevent noise?

Instrument cable shielding is done to prevent the electrical noise which could be because of the external or internal sources from affecting the transmitted signal. It would also reduce the electromagnetic radiation emission from the cable itself. Shielding is mostly composed of metal braiding, metal tape, or foil braiding. If the shielding is properly done then it can reduce the noise coupling. A shielded cable assembly could also feature a grounding wire called the drain wire.

Shielding would prevent the electromagnetic noise, it would prevent it in two ways. The first is by reflecting the energy and the second way is that it would pick up the noise and conduct it to the ground.

How to select an instrument cable shield material?

What are the factors that must be considered while doing the instrument cable shielding?

What are the major types of instrument cable shielding?

In this type of cable shielding, a thin layer of aluminum is used, it would be mostly attached to the carrier like polyester in order improve the strength and ruggedness. Mostly it would provide good coverage of the conductors which it surrounds. It is thin and this would make it to be harder to work with, like when applying a connector. Usually grounding is not done to the entire shield, the drain wire is used to terminate and ground the shield.

A braid is a woven mesh of bare or tinned copper wires, braid would provide a low resistance path to the ground. Termination can be easily done by crimping or soldering when attaching a connector. The major disadvantage of this type of shielding is that it won’t provide 100% coverage, there could be small gaps between the coverage. Most braids would provide 70% and 95% coverage, if the cable is stationary 70% coverage is sufficient. Braid is more effective as a shield, the flexibility of this shielding is limited. The cost of this shielding will be really high when compared to other types of cable shielding.

How to do the shield termination?

If the termination of the shield is not properly done then it would affect the shielding quality. If the current which flows to the outside surface of a shield is pinched down to a connecting wire, then the field which is associated with the current can easily enter the cable. Common mode voltage could be generated at the point of the poor termination. So while doing the shield termination we can use backshell connectors to reduce the noise. In case the backshell connectors are not available then a straight connection from the braid to the wall would restrict the noise. We should not do termination on a painted surface make sure that the termination is done on a plated metal surface and this surface must be protected against oxidation.

How to do the grounding of the instrument cable?

The connection to the earth is called grounding and this can provide protection against unwanted interference and emission. We should take proper care while doing the instrument earthing where the field instruments are connected to the control system. In the case of shielded cables, the earth continuity of the cable must be considered and it must be maintained and grounding should be done at one point in the control room. At the field end, the cable shield should be cut back and taped so that it would be independent of the earth.

How to do proper cable shielding?

Various levels of HMI screens involved in a process plant?

What is a power line carrier communication?

How to read the electrical diagram, and what are the symbols involved in it?