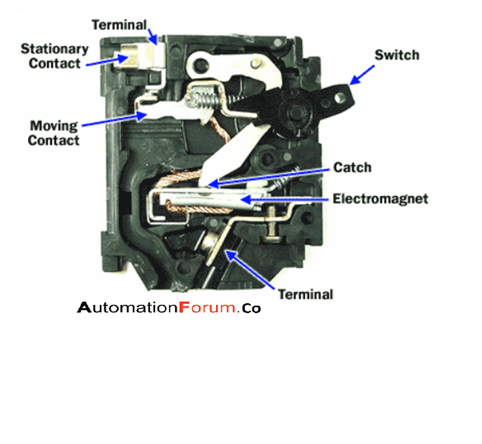 Introduction to the circuit breaker

What are the functions of a circuit breaker

What is the difference between fuse and a circuit breaker

In this type the vacuum is used as an arc quenching medium it comprises of one or more interrupter units per pole. Moving contact in the interrupter is connected to the insulating operating rod. It takes advantage of non-sustainability of electric arc in the vacuum and the contact separation takes place in the vacuum where there is no ionization due to medium. The initial arc will be removed because of vacuum.

In this circuit breaker, sulphur hexafluoride gas is used as an arc quenching medium. SF6 is an electronegative gas and it has the tendency to absorb free electrons. Breaker contacts are opened in the high-pressure flow of SF6 gas and an arc is struck between them, free electrons in the arc are quickly captured by the gas so that it can form immobile negative ions and this loss of conducting electrons in the arc rapidly builds up enough insulation strength to extinguish an arc. These circuit breakers are very effective for high power applications. It can be used in the voltage range of 115KV-230KV.

This circuit breaker uses high-pressure air-blast as an arc quenching medium and the contacts are opened in a flow of air blast established by the opening of the blast valve. The air blast will cool the arc and sweeps away the arcing products of the atmosphere, and so the arc is extinguished and the flow of the current is interrupted. Airblast circuit breakers are used for high voltage applications for voltages of 245KV and 400KV and up to 765KV

Why we use Negative Voltage in Vibration Measurement ?

What is MCC and what are the various components involved in it?

What is earthing? and its types