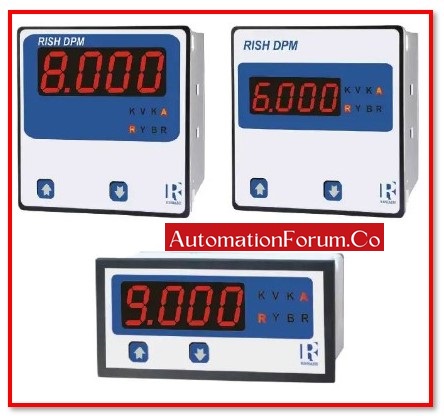 It is the symbolic representation of the Ammeter in a circuit.

What is the SI unit of Ammeter?

The flow of electric charge across a surface at a rate of one coulomb per second is measured by the SI unit known as the ampere (A).

The working of an ammeter is primarily depending on resistance and inductive reactance. Because there must be less voltage loss across it, the instrument has a very low impedance. Due to the identical current flow within a series circuit, it is connected in series.

With the use of a number of coils, this device’s primary purpose is to measure the current flow. The resistance and inductive reactance of these coils are extremely low.

Ammeters can be built in two different ways:

The total measuring current will flow through the instrument after it is connected in series to the circuit. As a result of their internal resistance & the measurand current, ammeters experience power loss.

Because of the two factors, the ammeter’s resistance is kept low:

Based on Construction:  7 types

Based on Flow of Current: 2 types

Magnetic deflection is a technique used by moving coil ammeters, in which current flowing through a coil positioned in the magnetic field of a permanent magnet causes the coil to move. The restoring force is provided by two spiral springs. The deflection of the metre is linearly proportional to current thanks to the consistent air gap between their own core and the permanent magnet poles. The scales on these metres are linear. Basic meters movement are capable of deflecting at full scale for currents ranging from around 25 microamperes to 10 milliamperes.

Application: Used in meteorology, an electrometer, and radio astronomy

Moving magnet ammeters work on a similar concept as moving coil ammeters, with the exception that the coil is mounted inside the metre case and the needle is moved by a permanent magnet. As a result of the coil’s ability to be manufactured of thicker wire and the condition that the current is not required to be carried by the hairsprings, moving magnet ammeters can typically carry bigger currents than moving coil instruments, frequently several tens of amperes. In addition, some ammeters of don’t have hairsprings; instead, the restoring force is provided by a fixed permanent magnet.

A piece of iron is used in moving iron ammeters, which moves in response to the electromagnetic force of a stationary wire coil. Direct and alternating currents are both measurable by this kind of meter (as opposed to the moving-coil ammeter, which works on direct current only). The iron element consists of a stationary vane enclosed in a coil and a moving vane coupled to a pointer. The moving vane deflects in opposition to the restoring force generated by the fine helical springs as alternating or direct current passes through the coil and creates a magnetic field in both vanes. A moving iron meter’s deflection is proportional to the square of the current.

Therefore, such meter would typically have a nonlinear scale, but the iron portions are typically reshaped to make the scale fairly linear for the most of its range. Moving iron instruments show the RMS value of any applied AC waveform. Moving iron ammeters are frequently used to measure current in AC circuits with industrial frequency.

An electromagnet is used in place of a permanent magnet in an electrodynamic ammeter. Both alternating and direct current can be detected by this device, which can also display accurate RMS for AC. Wattmeter is another application for this instrument.

A hot-wire ammeter measures the amount of current flowing through a wire that heats up and expands. Despite their slow response times and poor accuracy, these devices were occasionally employed to gauge radio-frequency current. These measure actual RMS for an applied AC as well.

The core mechanism for an ammeter is a digital voltmeter mechanism, and other types of metres are developed around this, in a manner similar to how the analogue ammeter served as the foundation for a broad range of derived metres, including voltmeters.

A shunt resistor is used in digital ammeter systems to create a calibrated voltage proportionate to the current flowing. The analogue to digital converter (ADC) in a digital voltmeter is then used to measure this voltage; the digital display is calibrated to show the current flowing through the shunt. These instruments are frequently calibrated to only display the RMS value of a sine wave; however, many designs may display the correct RMS within the constraints of the wave crest factor.

Additionally, integrating ammeters refer to a variety of instruments. In these ammeters, the current is added up over time, producing a result that is proportional to the amount of electrical charge that is carried by that current and is known as the current-time product. These can be used for energy metering (the charge must be multiplied by the voltage to give energy) or for determining the charge of a battery or capacitor.

The AC ammeter is the device used to measure the Alternating Current (AC) that flows through any branch of an electric circuit. It consists of a movable iron movement with two jewel bearings between which the assembly moves.

A device called a DC ammeter is used to measure the amount of DC current flowing through a circuit. The scale on the DC ammeter represents current in amperes. A basic movement can only carry exceedingly small currents because the coil winding is light and small. In DC circuits with a frequency of 50 or 60 Hz, this ammeter is used to measure the current.

What is the ammeter’s operating range?

The largest amount of current that an ammeter can read is referred to as its range. An ammeter typically has 30 divisions on its scales and a range of 0 to 3 amperes.

Where in daily life is the ammeter used?

Both DC and AC current can be measured with an ammeter. Anywhere in daily life, including autos, refrigerators, heaters, and delicate machinery, it can be used to monitor current.

How Should You Read an Ammeter?

The two terminals of an ammeter are marked with positive and negative indications on the back. Connect the devices appropriately. The ammeter will show the current drawn by the instrument when it is turned on.

What is an ammeter used for?

An ammeter is a device used to measure electric current in amperes, either in direct current (DC) or alternating current (AC). Because only a tiny fraction of the current is sent via the meter mechanism when the current is high, a shunt connected in parallel with the meter carries the majority of the current, an ammeter may measure a wide range of current values.

Reading and Interpreting of Piping and Instrumentation Diagrams