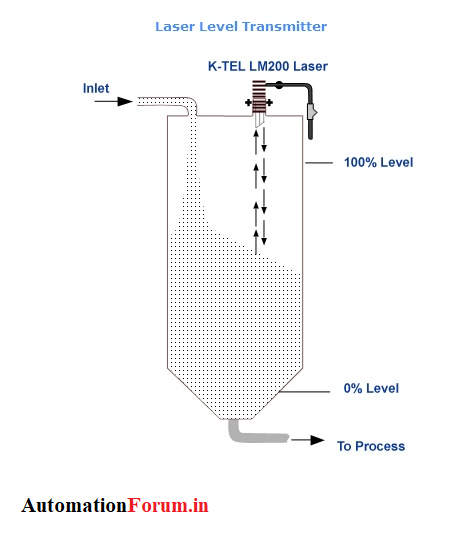 The only difference is that the former uses speed of light while the latter uses speed of sound waves. Laser level measuring devices can use a variety of materials such as bulk solids, slurries, and opaque fluids such as dirty sumps, milk, and liquid styrene, etc.

Like an ultrasonic sensor, a laser transmitter is also mounted at the top of the tank, which then directs a short light pulse downward to the process liquid surface. Then this light is reflected back to the sensor. The measuring system is included

Lasers have practically no beam spread (0.2 ° beam divergence) and no false echoes and can be guided through spaces as small as 2.

Laser transmitters can deliver accurate results even in heavy vapor and foam processes. They can be used conveniently with multi-blockade vessels.

For high-temperature or high-pressure applications such as in reactor vessels, lasers need to be used in conjunction with specialized viewing windows to isolate the transmitter from the process. These glass windows must pass through the laser beam with minimal diffusion and attenuation.

The wavelength of light waves is very short compared to ultrasonic and microwave waves, due to which they do not experience virtual beam divergence, so a laser beam can be targeted at a point without any intervention from nearby entities.

Laser radiation propagates at the speed of light through the medium. This means that very high update rates can be achieved with none of the ‘ lock – in ‘ issues that can be experienced when using ultrasonic devices.

The measurement of laser level is absolutely independent of the medium’s pressure or temperature variations like air. Consequently, there is no difference in the speed of light passing through any gaseous medium.

Even in applications for level measurement involving unidentified and often varying gaseous densities such as petrol or gas tanks, laser level transmitters offer accurate results without any calibration problems.

What are fire branches?