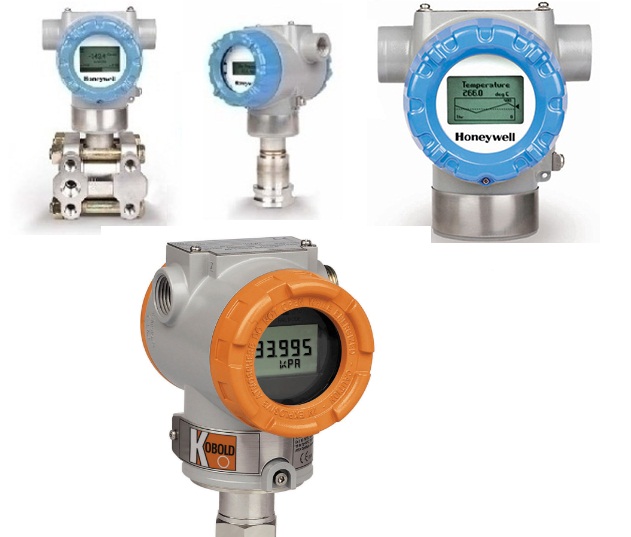 In smart and fieldbus transmitters the sensor is usually digital. Keeping the sensor signal digital from the very beginning provides for more precise signal processing and lowers noise pickup and signal degradation. The signal from a digital sensor gives the value of the measurement as a function of frequency or time. Such time based functions do not depend on the signal amplitude. For example, a capacitance-type pressure sensing element can be a part of an oscillatory circuit with a frequency output. Similarly, an ultrasonic flow meter detects the time of flight.
Other digital sensors operate on frequency phase-shift. Timers in the microprocessor easily measure frequency and duration using precise crystal clocks. In such direct digital measurements there is no need for an A/D converter, which also eliminates the conversion error and lowers inaccuracy by eliminating quantization error. In digital transmitter calibration done withe help of set and preset buttons present in the transmitter as shown in fig

Digital communication such as HART and  FOUNDATION fieldbus permits remote monitoring, diagnostics, configuration, and calibration. In the case of fieldbus networks, the digital communication can also be used to perform closed loop control.
In digital transmission there are only two valid states for the signal (zero and one). Therefore, a large amount of interference is required to distort the signal by changing one to the other. This makes the digital signal very robust. In addition, error detection techniques are provided to detect errors due to noise. Errors due to D/A conversion are eliminated by not requiring such conversions at all. HART transmitter communicates at 1200 bit/s, which is too slow for closed-loop control but adequate for the technician to perform interrogation using a handheld tool. In order to guarantee fast loop response, in most applications the analog 4- to 20-mA signal is used for control  HART transmitters are typically wired in a point-to-point fashion. Multi-dropping up to 15 transmitters on the same pair of wires is possible but is rarely used as it is slow and not well supported in control systems.To calibrate hart transmitters we need HART communicators

FOUNDATION fieldbus transmitters use the H1 version of fieldbus communicaton at 31.25 kbit/s, which is fast enough for closed-loop control. This speed eliminates the need for using analog signals. Typically 12 to 16 devices, which can be a mix of types and suppliers, are multi-dropped on the same pair of wires. Fieldbus is much more than a digital equivalent of 4- to 20-mA transmission. Fieldbus can be used in place of Distributed Control Systems (DCS) because the devices in the field can also perform the control functions. This reduces the controller and I/O-subsystem complexity because the majority of controls tend to be simple monitoring and basic control functions, computation, or logic, which all can be done in the field instruments.Fieldbus transmits the measurement status information along with the sensor’s reading. The status information includes measurement quality and limit condition information. The measurement quality is usually stated as Good, totally Bad, or Uncertain, e.g., having an error of not exceeding a few percent. Other function blocks use this measurement quality information to automatically initiate safety steps or to exclude that measurement when doing selection or calculating an average. Smart and fieldbus transmitters use their auxiliary sensors to provide temperature and static pressure compensation of the primary sensor’s reading. Such compensated smart transmitters still have only one output because the other measurements only serve to detect the existing conditions under which the primary sensor operates.

How to calibrate Fieldbus Transmitters ?

What is a PID control action?