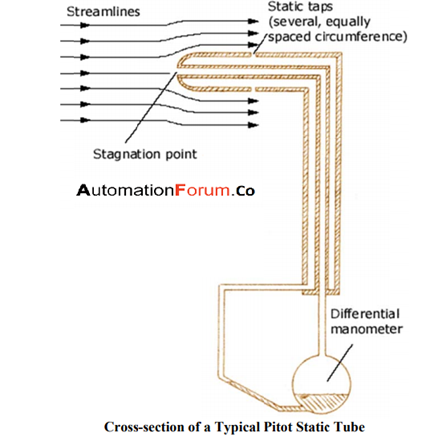 What is a pitot tube and what is it used for

How does a pitot tube work

A pilot tube can be considered as a small cylinder which is placed in a way that fluid can enter so it would be opposite to the fluid flow it’s one end is open and the other end is closed because of this the fluid that enters won’t be able to flow further and it will come to a static position. The diaphragm inside the pilot tube will separate the static fluid pressure from the total system pressure. The difference between these two measurements is the fluid flow rate. A pilot static tube is a flow velocity meter and it is capable to measure fluid velocities as a localized point. The energy conversion takes place at the stagnation point. Potential energy is converted into kinetic energy. A pressure higher than the dynamic pressure results from the kinetic to potential conversion. Static pressure is compared to the dynamic pressure-flow so that it can be measured with the help of a differential manometer.

How pitot tubes are constructed

A pitot tube is a slender tube that has two holes and it is used to calculate the velocity of the fluid that flows through the pipe. A pilot tube is a small round cylinder with one end opened like a small hole and the other end closed. A separate chamber can be seen in the pilot tube and that would be filled with fluid and it has static pressure. The chambers are separated by diaphragm, so if the pilot tube is installed in the flow stream, then it would measure the direct pressure at the contact pilot tube hole, and the second measurement is needed for the static pressure and the difference between these two measurements would be dynamic pressure. To measure the static flow the pressure sensing element must be arranged properly. The axis of the tube measuring the static pressure should be perpendicular to the boundary

How do you install a pitot tube

The pitot tube must be installed perpendicular to the duct. The head must be kept parallel facing the flow. If it is required to measure the speed of the fluid then the instrument must be placed in the opposite direction of the fluid.

What are the advantages of a pitot tube

What are the disadvantages of the pitot tube

What are the applications of the pitot tube