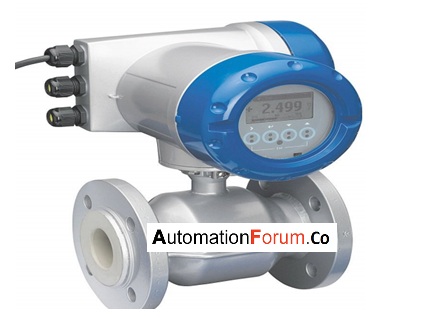 A magnetic flow meter is used to measure the fluid flow, magnetic or electromagnetic meters can handle slurries. These meters don’t have any moving parts and it is a volumetric flow meter. Mostly these flow meter meters electrically conductive things such as corrosive fluids. This flowmeter cannot be used with hydrocarbons or other non-aqueous solutions. The magnetic flowmeters can only be used to meter the conducting fluids such as water that has ions in it. Magnetic flow meters can measure the mass flow of a fluid and it doesn’t have any moving parts and because of this, it can handle high pressure without any leakage and also any kind of corrosive fluids.

Where should we use electromagnetic flow-meters

How magnetic flow meters are constructed and how does it work

The important part of a magnetic flow meter is a flow tube and the flow tube is mounted directly in the pipe. There are no moving parts in this meter so that the pressure drop will be the same as in the normal pipe. Mostly the pipes are non-conductive. In the inner part of the pipe, two electrodes and an electromagnet are used. The electrodes will be in contact with the fluid and it is placed perpendicular to the direction of the fluid and the magnetic field lines. The pipe is mounted in the gap of magnet.

This flow meter is either powered by AC or DC current, and it would be applied to the magnetic coil. The liquid that flows through the pipe acts as a conductor only conductive fluids can be measured by using this meter.  This meter works according to the faraday’s law of electromagnetic induction and according to this law when a conductor moves through a magnetic field at a proper angle then the induced voltage of the conductor will be proportional to the conductor’s velocity. The pipe would be non-conductive. The distance between the electrodes is the same as the pipe diameter. So when the fluid flows through the pipe it also passes through the magnetic field that is created by the magnetic coil and because of this a voltage will be induced in the liquid and this voltage is detected by the electrodes that are placed in the pipe. The voltage induced will be proportional to the fluid flow velocity. There are no moving parts in this meter and because of this low-pressure drop so this meter can be used to check the flow rate of corrosive and dirty fluids which is not possible by using normal flow meters.

How to install a magnetic flow meter

The electrodes that are mounted in the pipe must be in electrical contact to the fluid that is measured and these electrodes must be mounted horizontally. While using this meter to measure the flow grounding must be done. In order to get proper measurements, the flow meter must be full.

What are the advantages of magnetic flow meter

What are the disadvantages of magnetic flow meter

What are the applications of magnetic flow meter

7-Best PLC simulator apps for android and their features

What is a vortex flow meter and how is it constructed